Mark Anderson
Lesser Flamingo (Phoeniconaias minor). The Asian and southern African populations are partially migratory, with many making regular movements from their breeding sites inland to coastal wetlands when not breeding.
10 May 2016

Millions of migratory birds are being lost each year as a result of illegal killing, taking and trade, United Nations officials warned on World Migratory Bird Day, calling for concerted action to end the threats to migratory birds and urging everyone to step outside and “listen to the birds chirping,” to appreciate how important they are to our planet.

The motives behind these illicit activities are various and the toll that they are taking is incredible – millions of birds are being killed each year – numbers that are totally unsustainable and which alongside other pressures such as habitat loss and climate change are leading to many once common species being at risk of extinction.

The theme of this year's World Day is “…and when the skies fall silent? Stop the Illegal Killing, Taking and Trade!”

Ahead of the Day, the Convention on Migratory Species (CMS) announced the creation of the Intergovernmental Task Force on Illegal Killing, Taking and Trade of Migratory Birds in the Mediterranean composed of Governments and the European Commission.

UN organizations such as the UN Environment Programme (UNEP), the UN Office on Drugs and Crime (UNODC), international environmental treaties, INTERPOL, law enforcement and judiciary organizations, hunting communities and nongovernmental organizations will also be part of the coalition.

“I fully support the global campaign to raise awareness about the threats to migratory birds from habitat destruction, overexploitation, pollution and climate change, United Nations Secretary-General Ban Ki-moon said. “I call for greater international efforts to restore and preserve migratory birds and the network of sites they need to survive as an important part of the environment on which we all depend.”

Perhaps the simplest way to appreciate how important birds' life is to us all, to the planet, to our ecosystem, and to nature is to step outside for a moment, close your eyes and just listen, or look up the skies

UNEP Executive Director Achim Steiner said: “During their long journeys, migratory birds run afoul of any number of natural obstacles, from predators to weather. They shouldn't also have to duck the grasping claws of the illegal wildlife trade. Illegal taking and killing of birds threaten not only the survival of bird species, but ecosystems, communities and livelihoods as well. So World Migratory Bird Day is not strictly for the birds; it's to remind us of the part they play for planet and people alike.”

Bird hunting has been traditionally practiced in the Mediterranean for centuries, but the recent surge in illegal activities, such as poaching and trapping, is endangering many threatened species that are already subject to other pressures, such as climate change and habitat loss.

Jacques Trouvilliez, Executive Secretary of AEWA, said: “Migrating birds are facing increasing pressures along their journeys and habitat losses and degradation are the most difficult to tackle. But the birds are also exposed to illegal killing, taking and trade. We can no longer say that these practices are traditional as the equipment to capture birds has become more efficient. The nylon mist nets are now almost invisible to birds. As a result more birds are taken from declining populations. We must stop the illegal killing now, if we don't want our skies to fall silent.”

Each year, up to 6.2 million exhausted birds, migrating between their breeding and wintering grounds, are caught in illegally set nets stretching for hundreds of kilometres along the North African coastline. The less lucky ones suffer an agonizing death on lime stick traps – twigs covered with extremely sticky glue. It is estimated that up to 2 million Blackcaps die in such traps each year.

The Intergovernmental Task Force will add new momentum to international efforts to tackle the illegal killing, taking and trade in birds by agreeing on new guidelines, recommendations and action plans to address the causes of poaching.

The Task Force will work towards changing the hunting practices in the region to make them compliant with national and international laws. It will also aim to enhance the enforcement of these laws through training of local police and judiciary, information exchange, promoting deterrence and prevention policies to end the large-scale killings of migratory birds taking place today.

The Task Force, which will hold its first meeting in Cairo from 12 to 15 July 2016, is expected to be replicated in other major flyways across the world. The socio-economic study on Hunting and Illegal Killing of Birds along the Mediterranean Coast of Egypt, which will be released by BirdLife International on World Migratory Bird Day, will give important input to this meeting.

Tackling illegal killing and trade in wildlife, including birds, and mobilizing global action around the issue will also be the focus of the 2016 World Environment Day, which takes place on 5 June and is hosted by Angola, under the slogan 'Go Wild for Life.' A global UN campaign to garner support for stopping the trade in many species and their products will also be launched. 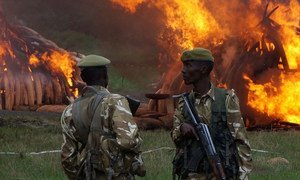 As African leaders soundly rejected “those who think our natural heritage can be sold for money,” senior United Nations officials expressed support for Kenyan-led efforts to end illegal wildlife trade during a weekend ceremony in Nairobi where tonnes of elephant tusks and rhino horns were burned to protest poaching, which is pushing several iconic species to the brink of extinction.