Small States like Seychelles have served as a “magnifying lens” for many issues that all nations must face, United Nations Secretary-General Ban Ki-moon told the National Assembly today, calling for the archipelago's continued support as the UN tackles three critical challenges: climate change, global sustainability and easing humanitarian suffering.

“In today's world, we are all interconnected. Problems and challenges are never confined to one country or region. Insecurity is spreading. Massive inequality persists, among people and nations,” said said Mr. Ban, stressing that too many people in too many places are excluded because of their race, religion, faith, sexual orientation, gender identity and other differences.

Moreover, he noted that violent extremists are committing atrocities designed to divide and destroy communities. Criminal networks are exploiting lawlessness and chaos and building links with terrorists, to traffic people, illegal drugs and weapons, and to hide their profits, he added.

“These problems require cooperation and coordination, in a global response. The United Nations is the forum where we seek solutions,” the Secretary-General said, praising Seychelles' strong democratic record, its efforts to secure political progress for women, measures to protect the environment – half the archipelago's land and one third of its vast marine territory are already protected – and to promote the UN Millennium Development Goals (MDGs).

At the same time, Mr. Ban spotlighted key issues on the UN's agenda that would require Seychelles' ongoing commitment and support, starting with climate change. Recalling that last month, the UN had broken the record for the highest number of countries to sign any treaty or convention in one day when world leaders gathered at UN Headquarters on 22 April to sign the Paris Agreement on climate change.

“Seychelles was one of them, and you went on to become the 16 country to ratify immediately as you sign this agreement. Congratulations and thank you very much for your leadership,” said the UN chief, also hailing the nation's leadership and influence in urging other governments to ratify the accord as soon as possible, as 55 countries, representing 55 per cent of total global greenhouse gas emissions, are needed for the agreement to enter into force.

Secretary-General Ban Ki-moon feeds a giant tortoise during his visit to the Botanical Gardens in Victoria, Seychelles. The giant Aldabra tortoise is on the list of vulnerable species. UN Photo/Mark Garten.

Mr. Ban next turned to the 2030 Sustainable Development Agenda, “with its 17 Goals – we call them SDGs – is our Declaration of Interdependence.” As the world is becoming more interdependent, among those 17 Goals, none could be implemented in isolation. “All these 17 Goals […] are tightly interconnected,” he underscored, adding that he Agenda, is a “universal project” that aims to enable all people to live in dignity, on a healthy planet.

“The true test of this new agenda will be in its implementation. We need action from everyone, everywhere. All sectors of society must be involved: government, businesses and civil society,” he said, welcoming the role of parliamentarians in beginning to engage on the SDGs more than a year ago. Further, Seychelles' 'Blue Economy' initiative is drawing the world's attention by linking the alleviation of poverty and improved food security with reduced environmental risks and ecological imbalances.

As for his last key point, the Secretary-General drew attention to the unprecedented numbers of people in urgent need of humanitarian aid around the world. “Today's refugees are caught up in the biggest displacement crisis of our era. I have been calling on leaders around the world, even in countries that have not been directly touched by this global phenomenon, to respond with compassion and respect for human rights,” he explained.

Mr. Ban noted that on September 19th of this year, the UN General Assembly will hold a summit to address large movements of migrants and refugees across the world – and the need for shared responsibility. Moreover, later this month, on May 23rd and 24th, I am convening the first-ever World Humanitarian Summit in Istanbul, Turkey.

“World leaders will make commitments to uphold humanitarian law, to protect civilians in conflict, and to improve the global response to the 125 million people who need urgent humanitarian aid,” said Mr. Ban, stressing that this number – 125 million – is the largest ever since the end of the Second World War.

“I count on Seychelles to engage in these important events,” he said, noting that from his first days in office in 2007, he had made climate change a top priority. “During the years of discussion, one thing has become very clear to me. Small States have big ideas and big political will. Your experiences, commitment and insights have been invaluable, he said, stressing: “When you are united, small states can change the world.”

Speaking directly to the young people sitting in the National Assembly today, he said the United Nations sees youths not as leaders of tomorrow, but as leaders today. “We are working with young men and women around the world on initiatives to build peace, to create jobs and to fight violent extremism. As you look to the future, I urge you to lift your eyes above the immediate horizon and become global citizens, demonstrating your allegiance not only to your immediate community, but to the wider world,” said the Secretary-General.

♦ Receive daily updates directly in your inbox - Subscribe here to a topic.
♦ Download the UN News app for your iOS or Android devices.
climate change|the 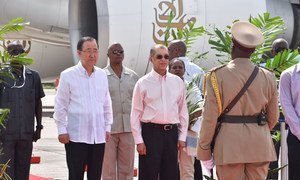 The problems facing our planet – climate change, poverty and insecurity – will only be solved through a global, multilateral response, United Nations Secretary-General Ban Ki-moon said today as he began an official visit to the Seychelles, a small island nation with “big ideas,” having shown leadership on climate action, environmental protection and the fight against maritime crime.