Mutual respect for different faiths and cultures is the “bedrock” of a world at peace and “prerequisite” for achieving many of the goals to which humankind and the United Nations aspire, the General Assembly was told today.

Opening the High-Level Conversation on Religions for Peace, Assembly President Mogens Lykketoft said that since its inception, the UN has worked for the betterment of humanity, by seeking to maintain international peace and security, promoting human rights and fostering sustainable development.

“Buttressing all of its efforts, however, has been the promotion of understanding, tolerance, respect and dialogue between and among diverse cultures, civilizations, faiths and peoples,” he said, stressing that these are now “prerequisites for achieving many of the goals that we as human beings and the United Nations aspire to today.”

Terrorist attacks all over the world, however, demonstrate clearly that achieving harmony and strengthening intercultural and interreligious dialogue is a great challenge and perhaps more important today than at any time in the recent past, he said.

Noting violent extremism as a serious concern, he said that there is a clear need for the international community to unite across all religions and all countries in response to such threats, align strategies and provide resources commensurate to the task.

With the 10-year review of the Global Counter-Terrorism Strategy, and the tabling of the Secretary-General's Plan of Action to Prevent Violent Extremism, Member States and the UN system now have a good opportunity to advance their thinking on how best to tackle these challenges, he said.

In his opening remarks, Nassir Abdulaziz Al-Nasser, High Representative for the UN Alliance of Civilizations (UNAOC), highlighted that mutual respect for different faiths and cultures is the bedrock of a world at peace, and understanding and acceptance of differences in religious beliefs are the foundations of long-term sustainable development.

“Prosperity and well-being demands that people coexist in full respect of their diversity,” he said.

The UNAOC has been developing projects that bring together people, especially young people, as they are the prime targets of violent extremism, he said.

At its 7th Global Forum held last week in Baku, Azerbaijan, under the theme: 'Living together in inclusive societies: a challenge and a goal,' some 150 youth representatives from all over the world shared their experience and worked together to define future narratives that stress the benefits of listening and learning from the messages of different faiths, cultural and ethnic backgrounds.

They also had intensive discussions on how best the Alliance could support the 2030 Agenda for Sustainable Development, in particular Goal 16 which calls for the promotion of “peaceful and inclusive societies for sustainable development.”

The Secretary-General's Plan of Action to Prevent Violent Extremism recognizes that security-based counter-terrorism measures cannot eradicate terrorism unless preventive steps that address the roots of the problem accompany it. The Plan identifies distortion and misuse of beliefs, ethnic and cultural differences as one of the drivers of violent extremism.

“The engagement of religious leaders is essential to counteract the messages of the leaders of terrorist groups who distort the core of religious beliefs for self-serving purposes,” Mr. Al-Nasser said, urging religious leaders to assert their rejection of violent doctrines, emphasize the peaceful and tolerant values inherent in their theologies, and condemn the destruction by extremists of ancient sites that are the testimony of the history ancient culture sand symbols of pluralism and tolerance.

The Forum included a session on how to defeat hate speech. As a result, a textbook on concrete recommendations on how to avoid and combat hate speech will be published in English, French, Spanish and Arabic, he added. 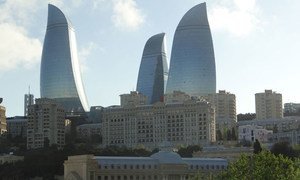 A global conference convened by the United Nations Alliance of Civilizations UNAOC concluded today, with delegations, who gathered in the Azerbaijani capital of Baku, making a renewed commitment to creating inclusive societies.