“Innovative solutions” with a concrete action plan are crucial to tackle youth employment challenge in Latin America, the Director-General of the United Nations’ International Labour Organization (ILO) told representatives at the 9th Ibero-American Conference of Ministers of Labour, recently held in Colombia.

“Youth employment is an absolute priority,” Guy Ryder said during the ministerial conference, adding that the “lack of trust of young people” is a huge challenge which requires “innovative solutions.”

Eight million youth are unemployed in Ibero-America, however, informality affects 60 per cent of those who succeed in landing a job, according to Mr. Ryder.

He added that we should “aim for another level, moving from generic solutions to specific programs” for youth.

Warning that regardless of the time in which they live, Mr. Ryder said that the aspiration of youth is to have a life plan.

“We must listen to and involve young people as they are strategic actors,” said Mr. Ryder, stressing that “if we fail, our societies are going to have big problems.”

In this regard, ILO has launched a global initiative for discussions on the future employment in the region.

“The world has changed and will change but ultimately what is required is the same: access to decent work and the possibility of developing a life project,” he added.

This bill no longer requires a military card for those joining the labour market, and offers new incentives for employers to hire young people while also implementing rural youth employment action plans.

The ILO Director-General attended the opening ceremony and the Future of Work Forum at the ministerial meeting – a preparatory meeting for the 25th Ibero-American Summit on “Youth, Entrepreneurship and Education” which is scheduled at the end of October in Cartagena, Colombia.

He also met with the three trade unions in the country, as well as representatives from the National Association of Industrialists (ANDI). 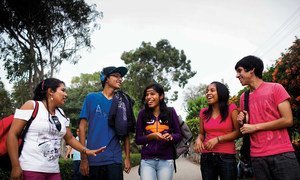 As more than 800 young leaders gather in New York for the annual United Nations Economic and Social Council (ECOSOC) Youth Forum, UN officials today launched a new initiative to tackle youth unemployment, making it clear that success in fighting poverty and inequality will largely depend on them being a driving force.