UNOCHA
A woman prepares a meal at a makeshift outdoor cooking area, atop the muddy grounds of the Bab Al Salame camp for IDPs, near the border with Turkey in Aleppo Governorate, Syria (January 2014).
6 May 2016

Secretary-General Ban Ki-moon and other senior United Nations officials today “unreservedly” condemned yesterday’s bombing of two camps for displaced people in Sarmada, located in north-western Syria, which according to early reports by first responders, killed around 30 civilians including children.

In a statement, Mr. Ban reiterated his call on the Security Council to send a strong message to all warring parties that there will be “serious consequences” for grave violations of international humanitarian and human rights law.

“Those responsible for yesterday’s seemingly calculated attack against civilians in the camp in Idlib, which could constitute a war crime, must be held accountable,” he said, urging the Security Council to refer the situation in Syria to the International Criminal Court.

Also calling the attacks “a flagrant violation of international humanitarian and human rights law,” the Office of the UN High Commissioner for Refugees (UNHCR) said the strikes demonstrate once again the “extreme difficulty” confronting civilians fleeing violence in Syria as they try to find safety.

According to UNHCR, the informal settlement of Ghita Al-Rahmeh, near the village of Al-Kamoneh, was hosting around 2,500 people—approximately 450 families—who had already fled their homes in western and northern rural Aleppo since late last year. Reports indicate that many people have since fled to surrounding hills, fearing further attacks.

The victims of the strikes are among some 6.5 million internally displaced people in Syria, many of whom have been uprooted several times as the frontlines of conflict have shifted over the last five years.

“It is an unacceptable tragedy that civilians who had already fled for their lives have been targeted in this way; the strikes demonstrate shameful scorn for the sanctity of the civilian nature of camps for internally displaced people,” the agency’s statement stressed. “A political solution to the Syrian conflict is more urgent than ever.”

Meanwhile, the UN High Commissioner for Human Rights, Zeid Ra'ad Al Hussein, stated that given these tent settlements have been in these locations for several weeks and can be clearly viewed from the air, “it is extremely unlikely that these murderous attacks were an accident.”

“It is far more likely they were deliberate and amount to a war crime,” Mr. Zeid underscored. “My staff, along with other organizations, will leave no stone unturned in their efforts to research and record evidence of what appears to be a particularly despicable and calculated crime against an extremely vulnerable group of people.”

The UN human rights chief also indicated that initial reports suggest the attacks were carried out by Syrian Government aircraft, “but this remains to be verified.”

“It is hard to find any more words to describe the horror facing civilians in Syria: bombed and slaughtered in their homes, shot in the streets and tortured in prisons; bombed in their hospital beds; bombed in the camps they flee to; facing immense difficulties crossing borders to escape the horror that has engulfed their country for five long years; and finally – if they somehow manage to get there – facing rejection and xenophobia in Europe,” he stated.

In addition, the High Commissioner said he is alarmed about developments in Hama Central Prison where a riot took place on 1 May after the authorities reportedly tried to extract five detainees and take them to the notorious Sidnaya prison where they were allegedly going to be executed.

“Detainees took control of a section of the prison and are holding some guards hostage, and the authorities have cut off water and electricity supplies,” Mr. Zeid reported. “Heavily armed security forces are surrounding the prison and we fear that a possibly lethal assault is imminent. Hundreds of lives are at stake, and I call on the authorities to resort to mediation, or other alternatives to force.” 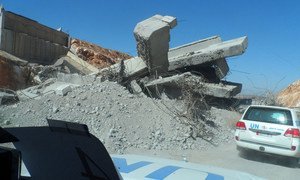 The top United Nations humanitarian official has called for an immediate, impartial and independent investigation into the air strikes that today left dozens of civilians dead and injured in the northern Syrian Governorate of Idleb, which, if found to be deliberate, could amount to a war crime.