UNICEF/Giovanni Diffidenti
A bicycle, damaged by fire, sits on a third-floor balcony of a destroyed building, in the north-western city of Misrata, Libya.
5 May 2016

As world leaders prepare to gather for a first-ever World Humanitarian Summit in Turkey later this month, the United Nations humanitarian coordinators for the Middle East and North Africa today called on the international community to assume its responsibility in finding solutions to end the widespread conflict and humanitarian crises in the region.

“Millions of people in the Middle East and North Africa are enduring intolerable human suffering. Widespread violence, conflict and extremism in Iraq, Libya, Palestine, Syria and Yemen are creating immense humanitarian needs, with the impact felt beyond these countries’ borders,” the humanitarian coordinators said in a collective press release.

The officials underscored that 55 million people in the region currently need humanitarian assistance to ensure their basic survival.

“In other words, millions of girls, boys, women and men do not know where their next meal will come from,” the coordinators emphasized.

“They lack access to essential health care, whether to give birth safely, receive treatment for chronic illnesses or protect children from preventable diseases. They are unable to access safe water and ensure basic hygiene. Those displaced from their homes lack adequate shelter, sometimes forced to sleep out in the open,” they added.

Moreover, the officials stressed, millions of families “do not sleep at night worrying about where the next bomb or mortar might fall and whether their loved ones will be caught in the cross-fire between warring parties or bear the brunt of extreme violence.”

“We have a shared responsibility to end this tragedy and preserve people’s basic dignity. Our humanity demands no less,” they said.

The officials said that in the lead-up to the World Humanitarian Summit, they consulted and listened to thousands of voices in the region.

A missile remains on a road in Sana’a, capital of Yemen. Photo: OCHA/Charlotte Cans

“Their feelings and demands were clear: outrage at the staggering level of human casualties and suffering being witnessed and felt on a daily basis; disbelief in the lack of accountability for clear violations of international humanitarian and human rights law; disappointment in the humanitarian system for failing to support and strengthen local response capacity; and conviction that humanitarian aid cannot be a substitute for political action that addresses the root causes of people’s suffering,” the humanitarian coordinators said.

Calling on global leaders to attend the Summit and “make it a success,” the coordinators emphasized that actions should include listening to the voices of the region and taking the bold decisions that will effect change.

“Leaders must assume their responsibility to find political solutions to end bloodshed, and prevent further suffering. States and other actors need to respect the rules of war and hold accountable those who do not,” they stressed.

In addition, the humanitarian community also has the responsibility to empower and protect the most vulnerable and treat all people with dignity, the coordinators said.

“We accept the challenge of working differently so as to end the need for aid and handouts, build resilience and enhance the role and capacity of local responders,” they said.

“As time ticks towards the Summit, it runs out every day for millions of affected people in the region. They have no choice. We do: humanity,” they added. 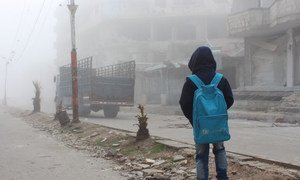