No corner of Aleppo is being spared, Security Council told, as UN officials urge end to ‘carnage’ in Syria

The cessation of hostilities in Syria Must be put back on track, the United Nations political chief today told the Security Council, as the UN Emergency Relief Coordinator said “there can be no explanation or excuse” for waging war on civilians, in Aleppo or anywhere else in the crisis-riven country.

The cessation of hostilities in Syria must be put back on track, the United Nations political chief today told the Security Council, as the UN Emergency Relief Coordinator said “there can be no explanation or excuse” for waging war on civilians, in Aleppo or anywhere else in the crisis-riven country.

“Unfortunately, the ever more shocking reports have been received from Aleppo city over the past two weeks,” Jeffrey Feltman, the UN Under-Secretary-General for Political Affairs, recalled during a briefing on Syria and the situation in the country’s largest city.

Mr. Feltman took note of the recent arrangement concluded between the United States and Russia for a “day of silence” in Aleppo and its surroundings. It was scheduled to start at 00:01 Damascus time last night, but the implementation has reportedly proven challenging even as it has led to an overall decrease in violence.

“Consolidating and extending this agreement would be an important step in the right direction. We also hope that the earlier announced arrangements of ‘days of silence’ in parts of Damascus and Rural Latakia will also be consolidated and welcome the news that the ‘silence’ has been extended in the Eastern Ghouta suburb of Damascus for the next 48 hours,” the UN official said.

Turning to the political process, he told the 15-member Council that the UN Special Envoy for Syria, Staffan de Mistura, has clearly stated that in order to be credible, the next round of negotiations should be supported by “tangible” progress on the ground, including through increased humanitarian access.

Mr. de Mistura intends to re-convene intra-Syrian talks in May to arrive at an agreed way forward by August. Doing so without progress on the ground “runs the real risk of a failed political process,” the UN political chief warned.

The Security Council also heard from Stephen O’Brien, the UN Emergency Relief Coordinator, who said he is “horrified” by the further death and destruction in Aleppo, and that life for people there “has lost all sense.”

“Access to basic and essential services, such as water and electricity, is sporadic, at best. People are living under daily threat and terror. Those who remain in eastern Aleppo, roughly 300,000 people, live in constant fear over the next attack from the air, including from barrel bombs,” he explained, adding that “there can be no explanation or excuse, no reason or rationale, for waging war on civilians.”

Mr. O’Brien’s remarks also focused on the “inexcusable, deeply disturbing attacks” on medical facilities: “We have all seen the harrowing images of bombs and mortars raining down on medical facilities and medical personnel across Aleppo in recent days. These terrible attacks not only claim innocent lives, but also have a multiplier effect, leaving tens of thousands of civilians unable to obtain even the most basic levels of care, even as fighting intensifies around them.”

In the last few days, many humanitarian actors have had to suspend their operations while tens of thousands of children could not be vaccinated last week. Mr. O’Brien said the UN Office for the Coordination of Humanitarian Affairs (OCHA), which he heads up, is “dismayed” that the Syrian Government did not approve their request for a cross-line inter-agency convoy to eastern Aleppo city in May.

“My question to you today is again: how many more deaths, how much more suffering can we tolerate before there is a collective push towards an end to this senseless and shameful crisis affecting Syrians, their neighbours and many more people beyond?” the Emergency Relief Coordinator asked.

Meanwhile in Geneva, Jan Egeland, the Special Advisor to the Special Envoy for Syria, briefed the press on humanitarian efforts, saying that the fighting and bombardment in recent days is creating new areas with endless suffering and no access for human right workers.

On a positive note, he reported that during April, humanitarian workers reached more than 40 per cent of all of the people in the besieged areas, compared to about 5 per cent of people in such areas being reached during all of 2015.

Altogether, 778,000 people in hard-to-reach and besieged towns have been reached. In one of the key achievements, virtually all of the civilians in the city of Deir ez-Zor received aid from 22 air drops that have been conducted successfully in recent days.

In addition, the four towns of Madaya, Zabadani, Foah and Kefraya were reached, following weeks of obstacles. But going forward, Mr. Egeland added, requests to reach besieged areas have only been granted for about 25 per cent of the affected people, with another 25 per cent of beneficiaries being approved only with a significant number of conditions.

At the same time, in Berlin, following a meeting with the German and French Foreign Ministers, Mr. de Mistura said the top priority remained what was most important to the Syrian people: “They are telling us we are looking for peace, we are looking for the end of this conflict, we believe in discussion in Geneva but we need to see with our eyes that the cessation of hostilities is again [taking place]. And the test is Aleppo now.”

Expressing the hope that his current diplomatic meetings, as well as the efforts of the Council, would revitalize the truce, he said: “The alternative is truly quite catastrophic because we could see 400,000 people moving through the Turkish border. We could see what, at the moment, looks like a possibility of a political transition to be actually handicapped by a cessation of hostilities, which is still there, [but] could be collapsing.” 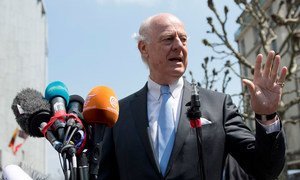 UN envoy ‘cautiously hopeful’ for re-launch of truce in Syria

Following discussions in Moscow on the intra-Syria talks, the United Nations envoy facilitating the process has said that he is cautiously hopeful that the cessation of hostilities pact will be re-launched, “perhaps even later today.”