UNHCR/Gabo Morales
Syrian refugee Hanan Dacka takes part in the 2016 Olympic Games torch relay in Brasilia, Brazil, on 3 May 2016.
3 May 2016

Flanked by cheering crowds, a 12-year-old Syrian refugee girl ran with the Olympic flame through Brasilia today, kicking off a relay across the host country ahead of the Olympic Games in August, the United Nations refugee agency announced.

The Office of the UN High Commissioner for Refugees (UNHCR) said that the Organizing Committee of the Rio 2016 Olympic Games selected Hanan Dacka, who has been living in Brazil for the past year, to participate in the first day of the torch relay on Brazilian soil.

With the number of people displaced by conflict and persecution at its highest in the post-World War II era, Hanan’s carrying of the Olympic Torch through Brasilia symbolizes solidarity with refugees everywhere.

After being lit on 21 April in the Greek city of Olympia, birthplace of the Games, the flame was carried by Syrian refugee Ibrahim al-Hussein through Eleonas camp, the Athens centre, housing some 1,500 asylum-seekers.

The Brazilian leg will last nearly 90 days, concluding with the Games’ opening ceremony on 5 August in the Maracana Stadium, where the Olympic pyre will be lit.

“The most important thing in sport is to have fun and make friends," said Hanan before taking up the flame. "By carrying the Olympic Torch, people from all over the world will know that refugees are real people, and that we can do positive things,” she added.

She lives with her family in São Paulo. Fully integrated in the local community, she goes to a school near her home, speaks fluent Portuguese and has many Brazilian friends.

Hanan and her family used to live in the north-eastern Syrian city of Idlib. When war broke out, they sought refuge in Jordan, where they spent two and a half years in a refugee camp.

According to UNHCR, the family decided to leave for Brazil under the country’s special humanitarian visa program. To date, around 8,000 of these special visas have been issued by the Brazilian authorities, including to Hanan and her family who were recognized as refugees and are now rebuilding their lives.

The war in Syria, which entered its sixth year in March, has generated 4.8 million refugees in neighbouring countries and hundreds of thousands in Europe. Of the 8,700 refugees who have settled in Brazil, over 2,000 are from Syria. 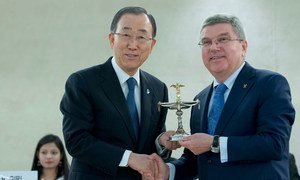