UN envoy ‘cautiously hopeful’ for re-launch of truce in Syria

Following discussions in Moscow on the intra-Syria talks, the United Nations envoy facilitating the process has said that he is cautiously hopeful that the cessation of hostilities pact will be re-launched, “perhaps even later today.”

“Silence or non-silence – what the Syrians want to hear is no bombs, no rockets, no shelling, no aerial bombing anymore and no canisters, so they can start believing in what we are trying to do with them,” said Staffan de Mistura, UN Special Envoy for Syria, at a joint press stakeout with the Minister of Foreign Affairs of the Russian Federation, Sergey Lavrov.

Mr. de Mistura said that the main reason he travelled to Moscow was to be able to discuss with the Russian authorities the “urgent feeling that what has been so far achieved should not be wasted, and that we should be able, instead, to build on it and move forward.”

For this reason, the Special Envoy said, he had, in a briefing to the UN Security Council, drawn the attention of the main sponsors of the intra-Syrian talks – Russia and the United States – about the fact that the cessation of hostilities was in danger.

The envoy recalled that the talks were “very proactive” in March, which he attributed to “a wind in the back of the intra-Syrian talks.” He said that the discussions then were helped by a feeling that the cessation of hostilities and delivery of humanitarian aid were progressing, keeping in mind that the most important outcome was a political solution through a political transition.

“These recent talks were, in a way, not helped by the news that we were getting,” Mr. de Mistura said. “The cessation of hostilities was becoming more and more [fragile]. That’s why we were still able to come up with some conclusions which, if you read them, are quite interesting, in the sense that they have been showing that there has been progress particularly in the first steps in what can be considered common lines on a political transition, which is the key of the future in Syria. Syrian-led but sponsored and supported by the international community.”

“And we all hope – and we have to be cautious – but we all hope that this indication, perhaps in the next few hours, will be able to have also a re-launch of the cessation of hostilities under whatever name we want to call it,” Mr. de Mistura said.

“If that takes place, then we are on the right track again, and we have been preparing for that,” he added.

A boy stands outside a building damaged during fighting in Aleppo City, Syria. Photo: OCHA/Gemma Connell

Mr. de Mistura highlighted that the UN has been “very proud” to be able to quickly organize an Operations Centre, which he said is much more technically and technologically effective than what was in place in the past, with more staff from both the Russian and the United States sides.

“Then the next steps are, of course, preparing for the [International Syria Support Group] ISSG, perhaps even a Security Council meeting reinforcing all this process and next the intra-Syrian talks, which obviously are the beginning of the end of the Syrian crisis, because the key word is political transition,” the Special Envoy said.

Yesterday, Mr. de Mistura met in Geneva with United States Secretary of State John Kerry and the two discussed the current situation on the ground and the need to bolster support for the cessation of hostilities.

Secretary-General Ban Ki-moon called on the warring Syrian sides to immediately recommit to the cessation of hostilities and uphold their responsibility to protect civilians.

“The Secretary-General is profoundly concerned about the dangerous escalation of fighting in and around Aleppo and the intolerable suffering, counted in mounting deaths and destruction, it is causing among civilians,” UN Spokesperson Stéphane Dujarric said in a statement.

Noting the temporary re-launch of a cessation of hostilities in Damascus and Lattakiya governorates, the UN chief stressed the need to expand these arrangements to other parts of Syria, with a special urgency for Aleppo.

Mr. Ban, according to the spokesman, also reiterated his call on all concerned regional and international actors, in particular, Russia and the United States, co-chairs of the International Syria Support Group (ISSG), which is supporting the current UN-mediated intra-Syrian talks, to redouble their efforts to help the warring parties put the truce back on track.

The ISSG, which along with Russia and the US, comprises the UN, the Arab League, the European Union and 16 countries, has been seeking a path forward to end the Syrian crisis for the past several months. 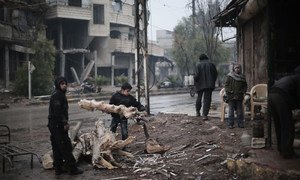 Syria: UN chief calls on warring parties to put cessation of hostilities 'back on track'

United Nations Secretary-General Ban Ki-moon called on the warring Syrian sides to immediately recommit to the cessation of hostilities and uphold their responsibility to protect civilians, his spokesman said today.