UN Photo/Jean-Marc Ferré
Thomas Bach (right), President of the International Olympic Committee (IOC), presents Secretary-General Ban Ki-moon, on behalf of the UN, with the Olympic Cup Award during in the Olympic Flame Ceremony at the Palais des Nations in Geneva.
29 April 2016

“This year, the International Olympic Committee has taken the extraordinary step of including a refugee team,” Mr. Ban announced at an event in Geneva entitled “Celebrating the Olympic Spirit” ahead of the Rio games which begin in August.

“For the first time in history, talented athletes who have been forced to flee their homes will get a chance to chase gold. Their fellow refugees will see outstanding contenders who give hope to all. And the world will see refugees the way they deserve to be seen: as talented, strong and inspiring people,” he declared.

Win or lose, the UN chief said, these athletes are “champions of the spirit,” and called on the world to “find lasting solutions” to support the refugee crisis.

The UN chief reminded those attending the event about the World Humanitarian Summit organized by the UN next month in Istanbul, Turkey. It will be followed in September by a meeting of the General Assembly on addressing large movements of migrants and refugees. He called on leaders and people to make the most of these global opportunities for progress.

Earlier in the day, Mr. Ban received the Olympic Cup Award on behalf of the United Nations. This is the second time the Organization received this distinction; the first time was 17 years ago.

“I sincerely thank you for this powerful recognition of the talented, dedicated and selfless women and men of our Organization. They work around the world and they work around the clock for a better future of all the people. I accept this on their behalf with deep gratitude,” Mr. Ban told IOC President Thomas Bach.

“My Special Adviser on Sport for Development and Peace, Mr. Wilfried Lemke, has made dedicated efforts to advance the goals of the United Nations through sport,” Mr. Ban underlined. “I thank all the United Nations bodies that are leveraging the power of sport. We are collaborating with athletes to inspire children. We are making the Games more green. We are joining forces to use this massive, global celebration of the human spirit as a reminder of our common humanity.”

“It was an electrifying experience. The crowds were cheering. The helicopters were flying overheard. There was noise but passion and cheer. I carried the torch, like so many others, for the dream of the Olympic Truce,” he added.

♦ Receive daily updates directly in your inbox - Subscribe here to a topic.
♦ Download the UN News app for your iOS or Android devices.
sports|the 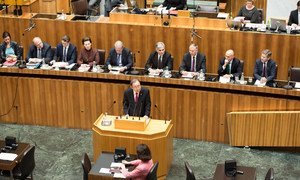 From its leadership on major United Nations bodies to its peacekeepers in the field, development aid and defence of human rights, Austria is a very important, vital member of the world community, UN Secretary-General Ban Ki-moon said during an address to the Parliament of Austria earlier today in Geneva.