“The continued failure to fully implement the ‘Package of Measures for the Implementation of the Minsk Agreements’ has underscored the crucial need to make progress toward a political settlement of the conflict,” said Tayé-Brook Zerihoun, the Assistant Secretary-General for Political Affairs, referring to the 13-point accord on ending the Ukraine crisis signed in Minsk in February 2015.

Some positive developments have been registered since the Security Council last considered the situation in Ukraine last December, Mr. Zerihoun noted, such as the largely respected ceasefire during the last weeks of 2015. Meanwhile, he said the Government of the new Prime Minister has committed to the implementation of the Minsk Agreements, which has been “widely welcomed.”

“These developments are highly valuable in their own right,” the UN official told the 15-member body. “However, to an extent, these positive steps forward continue to be heavily undermined to some extent by an overall precarious and unsustainable situation in the conflict area.

Mr. Zerihoun reported that the total number of conflict-related casualties continues to climb, now standing at 30,729, including 9,333 killed and 21,396 injured since the beginning of the conflict in mid-April 2014.

“While some of the recent civilian causalities have been caused by indiscriminate shelling, most are caused by landmines, booby traps, and other explosive remnants of war, which continue to represent the biggest threat to civilian life and security,” he warned.

Meanwhile, he indicated that the Special Monitoring Mission of the Organization for Security and Co operation in Europe (OSCE) in eastern Ukraine remains instrumental: “In order to carry out its mandate, the Mission must urgently be granted full and unfettered access, including to the border, as stipulated under the Minsk agreements.”

‘Grave’ situation on the humanitarian front

Turning to the humanitarian situation, the Assistant Secretary-General said it remains “grave,” with more than three million people in need of assistance, especially those close to the “contact line” and in areas beyond Government control.

A hospital in Sloviansk, Ukraine, which was destroyed by shelling. Photo: UNICEF Ukraine/Pavel Zmey

“The ongoing suspension by the de facto authorities in Donetsk and Luhansk provinces of almost all UN and [international non-governmental] operations since July 2015 is of great concern,” he stated. “Undue bureaucratic impediments deprive hundreds of thousands of people access to urgently needed essential services, supplies and other protection services.”

He explained that this is further compounded by the decision of the Ukrainian Government to suspend social payments, including pensions, to an estimated 600,000 displaced people, pending verification of their status.

“While the legitimate right of the Government to combat fraud is understandable, it is important to put in place a transparent system that provides clear information about the criteria for any cancellation of benefits, and proper communication to those concerned,” he underlined.

In addition, Mr. Zerihoun highlighted the number of pressing human rights concerns, including the question of missing persons and the need to create a mechanism by which all parties to the conflict exchange information and cooperate to establish the whereabouts of those who went missing.

Concluding his remarks, he told Council members that progress in the peace process will ultimately “depend on the political will of the parties, on their readiness and willingness to find a peaceful resolution of the conflict, through tangible deeds both on the ground and at the negotiation table.” 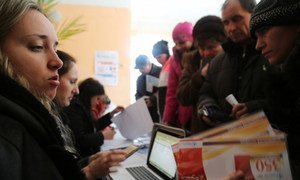 The two-year long conflict in eastern Ukraine has left around 1.5 million people hungry, including almost 300,000 people who are severely food insecure and in need of immediate food assistance, the United Nations food relief agency said today.