Following a three-day mission to Yemen’s north-western Sa’ada Governorate, the top UN relief official in the country urged Yemeni parties to remain committed to the cessation of hostilities and allow unhindered humanitarian access, while he called on the international community to increase the level of support.

“Only a political solution to the conflict can end the suffering in Yemen. I hope that the cessation of hostilities continues to hold to allow the scale-up of humanitarian activities and pave the way to peace,” said UN Resident Coordinator and Humanitarian Coordinator for Yemen, Jamie McGoldrick, in a press release.

Accompanied by George Khoury, Head of the UN Office for the Coordination of Humanitarian Affairs in Yemen, the Humanitarian Coordinator visited the Intensive Care Unit (ICU) at Joumhouri Hospital, which is facing impending closure due to lack of resources. This is one of the few remaining functioning hospitals in Sa’ada and is the main treatment facility for wounded patients.

“The closure of the ICU at Joumhouri Hospital would have dire consequences for access to life-saving care as critically-wounded patients would need to travel long distances,” noted Mr. McGoldrick.

The mission, which ended yesterday, also brought the UN officials Haydan city, where they saw the impact of the conflict on civilian infra-structure. Damage suffered by schools and Haydan hospital resulted in 3,000 students deprived of access to education and 10,000 people with no access to health care. According to the UN Office for the Coordination of Humanitarian Affairs (OCHA), the closest medical facility now available is two hours away, but roads have also been affected making travel difficult.

“Health and educational facilities should be preserved as neutral, protected spaces during armed conflict. I call on all parties to the conflict to act in accordance with international humanitarian law and refrain from targeting civilian infrastructure. Attacks on schools and hospitals have devastating consequences, particularly for children,” said Mr. McGoldrick.

During his mission, Mr. McGoldrick met with the Governor of Sa’ada, the Sa’ada Executive Council and Qatabir local authorities to discuss the need for increased support in the areas of shelter, health and education. Reaffirming the commitment of the international community to support people in need, the Humanitarian Coordinator requested local authorities to facilitate the work of humanitarian agencies, including conducting assessments to verify needs.

“People urgently need safety, food, water, basic health care and education for their children. The humanitarian community in Yemen is determined to expand humanitarian operations. I appeal to authorities to support our efforts by respecting the independence of humanitarian action and also urge the international community to scale up its support to Yemen to ensure that critical needs are met,” he declared. 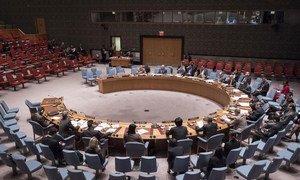 The United Nations Security Council today called on all parties involved in the intra-Yemeni peace talks to develop a road map for the implementation of interim security measures as they work towards a comprehensive agreement that will bring a permanent end to the political crisis in the country.