Masayoshi Suga/UN News Centre
Annamaria Olsson, center, receives the Intercultural Innovation Award, which was created by the BMW group and the UN Alliance of Civilizations (UNAOC). The award ceremony was held on the sidelines of the UNAOC's 7th Global Forum in Baku, Azerbaijan held on 25-27 April 2016.
26 April 2016

A project platform and network that makes social engagement and neighbourhood work accessible to Berlin's large non-German speaking population – winner of an intercultural innovation award at a United Nations forum in Baku today – was sparked by one woman's own migrant experience and the rise of xenophobia in Europe.

Three years after its inception, Give Something Back to Berlin – or GSBTB – is now well-known in Europe. It was declared the winner during an award ceremony as part of the Global Forum Baku 2016, held in the Azerbaijani capital and convened by the UN Alliance of Civilizations (UNAOC).

The Forum, which officially opened earlier today, is bringing together nearly 3,000 participants, including Heads of State and Government, political officials, civil society representatives, religious and youth leaders, who will share their perspectives and solutions under the main theme on 'Living Together in Inclusive Societies: A Challenge and A Goal.'

“The refugee crisis we have been seeing lately actually created a unique opportunity to build a new culture of living together,” Annamaria Olsson, founder of GSBTB, said upon receiving the Intercultural Innovation Award, which was created in 2011 under the partnership between the BMW group and the UNAOC.

Faced with an estimated influx of 160,000 newcomers to Berlin in recent years, including 71,000 from outside the country, GSBTB's role as a facilitator of social integration is growing fast as many migrants and refugees face stigmatism, exclusion and discrimination.

"We are bringing different kinds of migrants together and make them learn and share,” she told the UN News Centre, noting that volunteers of 60 nationalities work with them.

GSBTB runs an accessible online platform to inspire and mobilize Berlin's migrant community to create social impact and foster integration, organize events for newcomers to meet actors in their neighbourhoods, and establish networks for intercultural understanding, solidarity and participation.

Once a symbol of division between East and West, Berlin may have a conscience to look for better ways to live together, not stay isolated or segregated, she said. Now, 16 per cent of Berliners are foreign citizens. Ms. Olsson moved from Sweden to Berlin in 2008 to pursue her career as a journalist.

As a recipient of the award, which comes with a funding support, she feels greater responsibility to help stabilize the refugee situation in Germany. “We have more than 1 million migrants and have a lot to do,” she said, adding that other cities in and outside Germany are looking to GSBTB's model and expertise.

The finalists were selected from nearly 1,000 applicants from 120 countries. Other prize winners today included:

Fleeing armed conflict and persecution at home, and deteriorating living conditions in neighbouring countries in which they had initially sought refuge, people are risking their lives in growing numbers to find a safe place to live in Europe and beyond. Shown, at sunset, a group of Syrian and Afghan refugees arrive at the Greek island of Lesvos -- the main point of entry for refugees to Europe -- after making the crossing from Turkey in a rubber raft. UNHCR/Ivor Prickett

More than 400,000 refugees and migrants have undertaken the dangerous crossing to Greece in 2015 alone, up from 219,000 in 2014. People smugglers charge between $1,200 to $1,400 per person for the trip and cram as many as they can into boats, sending them out to sea without a captain. Many of the boats capsize. In 2015, nearly 3,000 people have perished or gone missing and the death toll continues to rise. Shown, a Syrian woman cries with relief as she embraces her three young children after a rough crossing. UNHCR/Ivor Prickett

New obstacles at every turn

Travelling by land and sea from Africa, the Middle East and Asia, refugees and migrants face new trials and dangers at every turn. Migrant women and children are especially vulnerable to trafficking and exploitation. Pictured, refugees approach the border between Greece and the former Yugoslav Republic of Macedonia. Earlier clashes with Macedonian security forces were calmed when the authorities on both sides, with help of UNHCR, created a system to control the flow of people through the border. UNHCR/Ivor Prickett

Forced to sleep outside for nights in a row at a ‘collection point’ and prevented from moving on to Budapest, refugees in Röszke, Hungary, confront the police. Some then broke through the police lines and set out on the road to Budapest. But by nightfall, most had been persuaded to go to a registration centre, which turned out to be full, resulting in their having to spend yet another night outside. By then, hundreds of additional refugees had arrived from Serbia at the original 'collection point.' UNHCR/Mark Henley

Education is highly valued among Syrians, who once enjoyed free, mandatory schooling before the war. The worsening conditions they have been facing in exile in neighbouring countries are having a devastating impact -- some 90,000 Syrians of school age now have no formal education. This is one of the motivating factors for families trying to relocate to Europe. Shown, in Hungary, a Syrian boy looks up at police attempting to stop the refugees from leaving for Budapest. UNHCR/Mark Henley

Unable to cope with the flood of refugees streaming across their borders every day, some countries closed entry points along their borders. For example, the Hungarian Government built a fence along its border with Serbia and instituted a law criminalizing irregular entry into Hungary. Senior UN officials condemned the actions. Soon afterwards, the UN welcomed a European Union decision to increase aid to countries neighbouring war-torn Syria and to relocate 120,000 people within Europe, but said much more needed to be done. Pictured, refugees are seen through the razor wire fence in Hungary. UNHCR/Mark Henley

Stranded for days at Budapest's main railway station as the Hungarian Government cancelled all trains to Germany and shut its borders to Western Europe, hundreds of mostly Syrian refugees, many of whom had already purchased train tickets, set out to walk the 250 kilometres (155 miles) to Vienna. UNHCR/Mark Henley

Thousands of refugees arrive in Vienna, many having walked dozens of kilometres shod only in sandals and flip-flops. This has led to a huge demand for shoes. In response, locals in Vienna have donated shoes for the refugees to replace their worn-out footware. UNHCR/Michael Schöppl

The United Nations is working alongside Governments and partner humanitarian agencies across Europe to provide aid to refugees and migrants and ensure that their rights and dignity are respected. It is also working with countries to develop longer-term solutions that are effective, feasible and in line with universal human rights and humanitarian standards, including the right to claim asylum. Shown, in Hungary, near the border with Serbia, staff of the UN Refugee Agency install a tent for new refugees, thousands of whom arrive every day with the hope of reaching European countries such as Sweden or Germany. UNHCR/Olivier Laban-Mattei

♦ Receive daily updates directly in your inbox - Subscribe here to a topic.
♦ Download the UN News app for your iOS or Android devices.
alliance 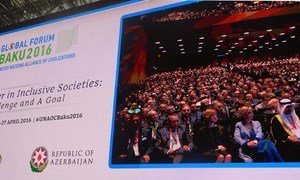