UNICEF/Kate Holt
A mother camps outside with her children under a mosquito net at an emergency food distribution site being run by UNICEF and the World Food Programme (WFP) in Thanyang, Unity State, South Sudan.
26 April 2016

The arrival in Juba of First Vice-President-designate Riek Machar should open a new chapter for South Sudan and allow “the real transition to begin,” the United Nations peacekeeping chief said today, stressing that the security situation in the country, however, remains precarious amid a worsening humanitarian and human rights situation.

Briefing the Security Council, UN Under-Secretary-General for Peacekeeping Operations Hervé Ladsous noted that, in a “positive development,” Mr. Machar had landed in Juba less than two hours earlier, and was expected to be sworn into office later in the day.

“It is vital that the political and security trends now under way in the country change rapidly if we wish to see a possibility for us to see the peace process succeed,” he said.

“It is vital that parties should take this opportunity to show the genuine determination to move forward with the peace process,” he added.

In his briefing, Mr. Ladsous emphasized that intermittent fighting was witnessed in several areas of the country.

Noting that the Government of South Sudan has continued to impose restrictions on the movement of the UN Mission there (UNMISS) and humanitarian workers, in violation of the Status of Forces Agreement, Mr. Ladsous stressed the need for unimpeded movement by the Mission and humanitarian partners in order to address the worsening humanitarian and human rights situation.

“These restrictions have severely impacted the Mission’s ability to move and protect civilians as well as the UN’s ability to deliver badly needed humanitarian assistance,” Mr. Ladsous said.

“I would urge the Council to send a strong message to both the Government and the opposition on the utmost imperative to grant the Mission and humanitarian partners unimpeded freedom of movement to allow them to implement their respective mandates.”

Mr. Ladsous noted that of particular concern are the recent clashes between the SPLA and armed groups in Wau County, Western Bahar El Ghazal, leading to killings, and displacement of civilians. He said that fighting between SPLA and opposition forces has also been reported in Upper Nile and Unity and in the Equatorias over the past few weeks.

He said that the preliminary investigation into the violence in the UNMISS civilian protection site in Malakal on 17 and 18 February indicated that at least 25 internally displaced people were killed and more than 140 injured.

The Under-Secretary-General stressed that in view of the gravity of the incident, the Secretariat has convened an independent Board of Inquiry to look into the response of the Mission to the crisis. In addition, Secretary-General Ban Ki-moon has decided to establish a special investigation to look into all factors that contributed to the violence, and determine the responsibilities, he said.

The special investigation will be led by Abiodun Bashua and is about to start its work. The Security Council will be briefed on the outcome of both investigations by early June, Mr. Ladsous said.

Turning to the humanitarian situation in the country, Mr. Ladsous said it is “unfortunately still worsening in scale, scope and urgency.”

“After more than two years of conflict and economic decline, more than half of the South Sudanese population are in need of humanitarian assistance. People’s coping mechanisms are exhausted and, for far too many, survival has become a daunting challenge,” he emphasized.

The onset of the rainy season will put millions more at risk of severe food insecurity and disease, which he said was “a deadly combination.”

Urging the Security Council to demand that the parties and all armed actors immediately uphold their obligations under international humanitarian and human rights law, Mr. Ladsous stressed that the human rights situation in the country also remains of grave concern.

“Civilians continue to be systematically targeted on an ethnic basis and their homes and livelihoods destroyed,” he said.

“As reported by the High Commissioner for Human Rights, the scale of atrocities committed even after the signing of the Peace Agreement is unacceptable and there is no accountability for those committing these serious violations. Dissent is not tolerated and free speech is penalized,” he added.

Mr. Ladsous also said that the transitional government will have to “start work from day one” to address the governance, financial misappropriation and improving rule of law.

“The current slump in oil prices has pushed South Sudan to the brink of economic collapse. Even if the parties fully implement the peace agreement, the economic challenges will not be overcome without significant reforms and international assistance,” he stressed.

In addition, he said that other conflict drivers, such as the creation of the new 28 states, should be addressed in accordance with the Summit Decision of the Intergovernmental Authority on Development and the position of the Joint Monitoring and Evaluation Commission (JMEC).

“A unilateral implementation of this order would be detrimental to the peace efforts; it also requires tremendous resources that South Sudan cannot afford,” Mr. Ladsous said.

In that regard, he urged the Security Council, in coordination with the African Union (AU), to engage President Salva Kiir on the issue with the aim to halt the implementation of the order until the issue is mutually resolved within the transitional government.

Mr. Ladsous also emphasized the need for all parties to address the issue of impunity.

“Without justice and reconciliation, healing old wounds will not be possible, particularly if impunity is not addressed,” he stressed.

“There is a need for all parties to unite on this issue and agree on national reconciliation and transitional justice, including establishing the Hybrid Court as per the agreed timeline as well as rebuilding the national justice system,” he added.

Mr. Ladsous also called on the Council to work closely with the Intergovernmental Authority on Development and the AU Peace and Security Council to mobilize the required support for the JMEC Chairperson, former President Festus Mogae, and the AU High Representative, former President Alpha Oumar Konaré, to “generate the incentives and disincentives to change the current dynamics on the ground.”

“The South Sudan peace process is extremely fragile and will require a concerted and sustained effort at national, regional and international levels,” Mr. Ladsous said.

“Without political leverage generated by concerted international and regional efforts, they will not succeed,” he added. 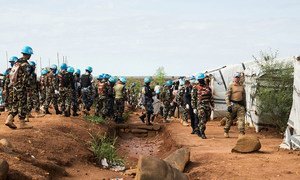 The United Nations refugee agency today expressed extreme concern over a combination of new fighting in previously peaceful areas, food insecurity and severe humanitarian funding shortages, which continue to cause a worsening of the situation in South Sudan for many civilians.