Masayoshi Suga/UN News Centre
The 7th Global Forum of the United Nations Alliance of Civilizations (UNAOC) kicks off at the Baku Convention Centre in Azerbaijan on 26 April 2016.
26 April 2016

“The Alliance is the soft power tool established to contribute to a more peaceful world by countering radicalization and polarization, by encouraging greater intercultural understanding and engaging in projects and programs that advance these goals,” said UNAOC High Representative Nassir Abdulaziz Al-Nasser during the opening session of its 7th Global Forum in the Azerbaijani capital of Baku.

The Global Forum brings together more than 2,500 participants, including Heads of State and Government, political officials, civil society representatives, religious and youth leaders, who will share their perspectives and solutions.

Rising disparities of wealth and opportunities within societies lead to marginalization and exclusion. Gender inequality, unemployment, and particularly youth unemployment, fuel radicalization and push people towards violent extremism, he said.

Many years of experience have proven that heavy-handed approaches and a single-minded focus only on security measures have failed. “We know that extremism and terrorism flourish when human rights are violated and aspirations for inclusion ignored. We must pay particular attention to addressing the causes of violent extremism,” he stressed.

Too many people, especially young people, join terrorist groups because they lack prospects and meaning in their lives, he said, underscoring the need to make a special effort to reach out to young people and recognize their potential as partners and leaders.

“Violent extremism is an affront to the purposes and principles of the United Nations,” he said.

UNAOC is called upon to address global challenges in the context of cultural and religious diversity, including violent extremism. The body participated in drawing the Secretary General's Plan of Action to Prevent Violent Extremism.

UNAOC's project activity is designed to counter polarization, radicalism, and violent extremism, in particular when they are religiously or culturally motivated.

The real benefit of UNAOC's programming is measured by the numbers of people affected by the activities of those young civil society leaders and their programs at the community, regional and national level when they go back home. By that measure, it has had a positive impact on hundreds of thousands of people, many young people, who have been provided positive messages of tolerance, understanding and mutual respect.

“We need to counter narratives of hatred and mistrust in order to prevent violent extremism,” he said, adding that the confusion between migrants and terrorists, which is perpetuated by some media, fosters the rise of xenophobia, stereotyping and stigmatization, particularly in host countries, and can lead to hatred, exclusion, and polarization, but also radicalization, violence and terror.

The ongoing conflicts, as well as the humanitarian crises and forced displacement of people which stem from them, add to the threat of violent extremism and terrorism, and place into jeopardy the development progress that has been achieved in the last decades, he said, stressing the need to redouble efforts to bring the 2030 Agenda to life.

Division and exclusion only play into the hands of the extremists. Their bombs target buildings, but what they really want to destroy is our common ground

In his message to the Forum, UN Secretary-General Ban Ki-moon stressed the important role UNAOC plays in carrying out the 2030 Agenda to leave no one behind and addressing the root causes of violent extremism and terrorism.

“Division and exclusion only play into the hands of the extremists. Their bombs target buildings, but what they really want to destroy is our common ground,” he said.

“Stereotyping is dangerous and destabilizing. Sensationalism may sell papers, but it does not solve problems,” he added, welcoming the Alliance's work to “amplify moderate voices and help present the facts. “In a world of suspicion and fear, the Alliance is forging trust and understanding.”

The Global Forum kicked off with a speech by Ilham Aliyev, President of Azerbaijan.

Welcoming the representatives of more than 140 countries who gathered in Baku, the president said that Azerbaijan is not only a geographic bridge between East and West, but also a cultural bridge. “For centuries, representatives of religions, cultures lived in peace and dignity in Azerbaijan,” he said.

Also speaking in the opening session was Recep Tayyip Erdogan, President of Turkey, who said “terror and terrorism have nothing in common with Islam.”

He added that terrorists don't have religious affiliation and national identity. 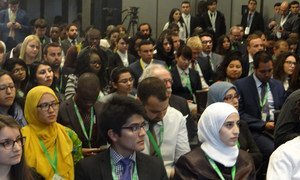 Gathering from around the world for a United Nations conference in the Azerbaijani capital of Baku, young people of all walks of life, from an Internet technology intern to a dentist, are working to define future narratives to counter potentially compelling discourse of those who seek to divide society.