US Navy/Jason R Zalasky
Suspected pirates wait for members of the counter-piracy operation to board their boat.

25 April 2016
United Nations officials today reiterated a call for a comprehensive regional framework to eradicate piracy and armed robbery at sea in the Gulf of Guinea, with the Security Council stressing the importance of addressing underlying causes and strengthening justice systems and judicial cooperation in the region.

“The Security Council remains deeply concerned about the threat that piracy and armed robbery at sea in the Gulf of Guinea pose to international navigation, the security and economic development of States in the region, to the safety and welfare of seafarers and other persons, as well as the safety of commercial maritime routes,” the 15-member body said in a presidential statement adopted today.

Expressing its deep concern at the reported number of incidents and level of violence of acts of piracy and armed robbery at sea in the Gulf of Guinea since 2014, the Council strongly condemned the acts of murder, kidnapping, hostage-taking and robbery by pirates operating in the Gulf of Guinea and called upon States in the region to cooperate on the prosecution of suspected pirates and intensify efforts to secure the safe and immediate release of all seafarers held hostage in or around the Gulf of Guinea.

“The Security Council emphasizes that regional peace and stability, the strengthening of State institutions, economic and social development and respect for human rights, and the rule of law, are all necessary to create the conditions for a durable eradication of piracy and armed robbery at sea in the Gulf of Guinea,” the presidential statement said.

The Council also encouraged States in the region, regional organizations and international partners to make fully operational all the regional counter piracy and armed robbery at sea mechanisms, and urged bilateral and multilateral partners to continue assisting States of the Gulf of Guinea with funds, skills, training and equipment.

At today’s meeting, the Security Council heard from Tayé-Brook Zerihoun, Assistant Secretary-General for Political Affairs, who noted that while there has been a steady decline in the number of recorded incidents of piracy, armed robbery at sea and other illicit and illegal activities in the Gulf of Guinea over the past few years, insecurity at sea remains a source of concern.

In the first quarter of 2016, the International Maritime Bureau’s Piracy Reporting Centre recorded six attacks and six attempted attacks in the Gulf of Guinea, including nine in Nigeria, one in Côte d’Ivoire, and two within the territorial waters of the Democratic Republic of the Congo, Mr. Zerihoun said.

“Ultimately, countering the current threats requires a combination of capacities in including qualitative improvements in the collection of intelligence; the sharing and improved analyses of intelligence; enhancement of the capacities – both infrastructure and training – of local enforcement agencies of the Gulf of Guinea countries; and the establishment of an effective customs and border control system throughout the sub-region,” he said.

In addition, he said it is important to avoid duplication of international capacity-building efforts with respect to maritime safety and security in the Gulf of Guinea.

Mr. Zerihoun noted that the African Union (AU) is scheduled to hold an Extraordinary Summit on Maritime Security and Development for Africa on 15 and 16 October 2016 in Lomé, Togo.

“We believe the Summit will provide a unique opportunity for the countries of the region to renew their commitment to jointly enhance the maritime security architecture in the Gulf of Guinea,” he said. 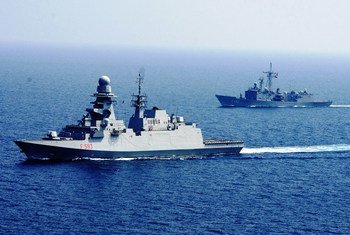 10 November 2015
The United Nations Security Council today renewed for another year its authorization for international naval forces to join in fighting piracy off the coast of Somalia, stressing that while the threat from Somali pirates has declined, it still remains a matter of “grave concern.”