An overall legislative framework is critical to ensure accessibility and affordability to food in Poland, an independent United Nations human rights expert said today, urging the Government to strengthen the protection of the right to food especially for small farmers.

“Small-scale farmers and the vulnerable groups in society will be affected the most in Poland, where the economy is in transition from centralized systems to market economy,” Hilal Elver, the UN Special Rapporteur on the right to food, warned at the end of her eight-day official visit to the country.

The current legal framework, Ms. Elver highlighted, is among the main obstacles hindering the realization of the right to food.

“At each level within the national framework, whether it is the Constitution or laws, adherence to the principles of human rights and upholding the rule of law is crucial in a democratic society,” she underscored.

As accessibility and affordability is fundamental to the right to food, a political embargo, however, has had an enormous impact on farmers, especially small-scale farmers who account for a large portion in the Polish agricultural sector, according to the UN rights expert.

“I am concerned that new legislation […] may nevertheless have unintended consequences which could negatively impact small-scale farmers and family farms,” said Ms. Elver.

While commending some positive Government policies and programmes, such as innovative agricultural technologies, subsidies from the European Union, new laws on school nutrition standards, Ms. Elver stressed that more structural changes need to be done for the full realization of right to food, as well as problems like obesity, child poverty and climate change.

“I would encourage Poland to […] establish a stronger legislative framework and coordinating institutional body to protect the right to access to nutritious food and ensure adequate support for small holders and family farming,” she concluded as one of the recommendations. 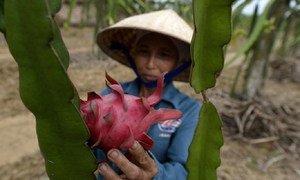 With over 800 million people worldwide still lacking access to healthy, nutritious food, family farmers must play an increasingly vital role in the global war on hunger, United Nations officials affirmed today, adding that the strong participation of the world’s family farmers can help “turn the tide” in shaping a new agenda for a sustainable future.