Iraq must immediately take concrete steps to plan for “the day after” the defeat of the Islamic State of Iraq and the Levant (ISIL), a senior United Nations human rights official urged today, calling for measures grounded in equality, the rule of law and a vision that has earned the confidence of all the country’s diverse communities.

“Iraq, it seems, has a long memory but is short on vision,” UN Deputy High Commissioner for Human Rights, Kate Gilmore,

said at the end of a week-long visit to the crisis–gripped country.

“It is like a vehicle travelling over rocky terrain, with a large rear view mirror but only a keyhole for a windscreen, despite a vicious contest for the wheel. The dominant narrative among many of Iraq’s leaders is of ‘my community’s grievance,’ failing to acknowledge the widespread nature of Iraqis’ suffering and failing to chart a course for an inclusive future.”

She added that Iraqis are “crying out for fairness, recognition, justice, appreciation and meaningful participation in shaping their future – a process that goes forward and not backwards.”

“All the leaders of Iraq, at every level, in both word and action, need to demonstrate a far greater commitment to peace, equality and to the rule of law than to grievances or to vengeance hardwired by sectarianism. There is a worrying absence of a political narrative that brings together all the diverse communities in Iraq, a narrative that includes all the minority communities. This must be urgently addressed,” she warned.

‘Future is not solely a matter of defeating ISIL’

Ms. Gilmore stressed that Iraq’s challenges are not military alone and its future is not solely a matter of defeating ISIL and liberating its territories.

“The existence of armed conflict in certain regions does not excuse or justify the absence of the rule of law in the broader Iraq. Judicial independence, an end to arbitrary detentions, respect for due process, the prohibition of torture – these are neither ideals nor luxuries, but are indispensable foundations of stability,” she said.

“Firm steps must be taken – now – to plan for the day after ISIL, steps that broaden inclusion and deepen fairness, including through structured local, regional and national dialogue on inclusion, peaceful co-existence and mutual respect,” she continued.

“Unchecked corruption, lack of accountability for past and present crimes, the problem of tribal militias, the growing number of internally displaced people, the partial or total destruction of entire villages and towns, violence against women, and the need for constitutional and legislative reforms are some of the many pressing human rights concerns in Iraq that need priority attention,” she stressed.

Abuses perpetrated by ISIL ‘must neither be forgotten, nor silenced’

During her mission to Iraq, Ms. Gilmore visited Baghdad, Najaf, Erbil and the Shariya camp for internally displaced people (IDPs) in Dohuk. She met the Minister of Foreign Affairs and other senior Government officials, as well as the President of the Kurdistan region of Iraq, leaders of civil society, including religious and ethnic communities, human rights defenders, and survivors of human rights violations.

“The blight of ISIL was made tragically clear by the stories of survivors of violations that we met in IDP camps in Dohuk. The Yezidi man who was forcibly convicted, subjected to mock executions and who witnessed a pregnant woman stoned to death; the woman who was subjected to sexual slavery for more than a year; the man whose entire family – wife, daughters, son – were abducted by ISIL and who couldn’t afford the $30,000 ransom demanded for their release,” Ms. Gilmore recounted, in an emotional statement.

“The human rights abuses being perpetrated by ISIL must neither be forgotten, nor silenced. The right to truth is crucial, as is the possibility of accountability for those who have committed what may amount to war crimes, crimes against humanity or even genocide. Evidence must be preserved and testimony must continue to be gathered,” he insisted.

The Deputy High Commissioner also urged the international community to provide more support to humanitarian needs, the rebuilding of essential infrastructure and towards justice and reconciliation in Iraq.

“We all have responsibilities towards the people of Iraq. While there is an international military coalition in place, a comparably resourced international coalition of practical compassion is also needed to help with the building blocks towards a sustained peace in Iraq,” she said. 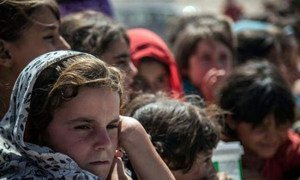 The United Nations Assistance Mission for Iraq (UNAMI) said it is receiving reports that humanitarian conditions are worsening and human suffering is increasing in the city of Fallujah, which has been under control of the Islamic State in Iraq and the Levant (ISIL/Da’esh) for more than two years.