UNICEF/UN013175/Al-Issa
In Aleppo, Syria, four-year-old Esraa and her brother Waleed, three, sit on the ground near a shelter for internally displaced persons.
22 April 2016

The UN envoy mediating a resolution to the crisis in Syria today announced that the latest round of peace talks will continue as planned through Wednesday, despite reports that the opposition delegation could suspend its official participation due to the lack of progress on the humanitarian front.

“Bottom line, I plan to continue the proximity talks both at formal level and at technical level until next week, probably Wednesday as originally planned,” said UN Special Envoy Staffan de Mistura at a press conference in Geneva on the state of the intra-Syrian talks he has been mediating.

“We need to try until Wednesday to get as deep as possible in the areas we have been starting discussing” he added, noting that he thinks he will be in a position by the middle of next week to report on where negotiations are and what has been reached during this round of talks.

Mr. de Mistura also indicated that according to all “objective criteria,” the cessation of hostilities is still in effect: “I repeat, is still in effect. None of the sides have renounced to it […] But it is in great trouble if we do not act quickly.”

He reminded reporters that the central point of the talks is to get ideas, concepts, and a vision of what could be either the Transitional Governing Body or what the Government is referring to as the “Government of broad-base.”

“The secret for us and the usefulness of these proximity talks is to get the respective visions of what is their view of the political transition and that is what we have been working on,” he said, highlighting that the difference compared to past talks is that both sides are aiming for a political transition.

He recalled how on Monday, the High Negotiations Committee (HNC) – the opposition delegation – showed “displeasure” about the non-progress of the humanitarian situation by talking about postponing their official participation in the talks.

“But luckily there is also a strong feeling of urgency in not dropping what is the mother of all issues: political transition, and getting deeper in this,” Mr. de Mistura said. “And therefore since Monday, we have been having formal meetings with the Government, and been able to consult and meet representatives of the Moscow, Cairo, Damascus platforms, the Women Advisory Board, civil society and indeed at the technical level, we had very deep meetings with the HNC representatives.” 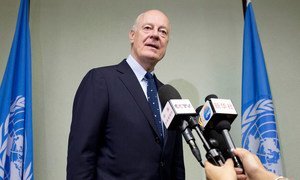 Following reports that the opposition delegation had announced a pause in the intra-Syrian talks under way at United Nations Headquarters in Geneva, the UN envoy mediating a resolution to the crisis said today that he plans on continuing discussions with all sides and take stock of the situation on Friday.