Yemen stands ‘closer than ever to peace,’ says UN envoy, as talks continue in Kuwait

The United Nations envoy for Yemen said that today’s sessions of the UN-brokered peace negotiations among Yemeni parties were “positive and promising,” as both sides continue to work towards achieving an agreement on ending the violence and devastation in the country.

“We hope they will forge a long-awaited new phase, the phase of peace, security and respect for human rights,” said Ismail Ould Cheikh Ahmed, UN Special Envoy for Yemen, in a press release.

The envoy said that despite “alarming breaches” in some areas to the cessation of hostilities pact that came into force at midnight on 10 April, there has been a marked improvement in security, according to independent sources. This morning, he heard about clashes in Taiz and other regions.

“We have called on all concerned parties to address these violations and we are actively following up on these issues,” the envoy said from Kuwait, where the talks are under way.

In particular, he commended the De-escalation and Coordination Committee (DCC) and local committees for their continuing efforts to strengthen the cessation of hostilities.

The envoy said that the current round of the talks will focus on five points that are based on UN Security Council resolution 2216 and the agreed-upon agenda that guided the Biel Talks this past December.

“We in the United Nations do not believe that these points have to be implemented sequentially. We have proposed that committees working in parallel to discuss implementation mechanisms in each area,” the envoy said.

The overall objective of the peace talks – which opened yesterday in Kuwait after a three-day delay – is to reach a comprehensive agreement that lays the foundations for a return to a “peaceful and orderly transition” based on the Gulf Cooperation Council (GCC) initiative and its implementation mechanism and the outcomes of the National Dialogue Conference.

The proposed working plan constitutes a strong framework for a new political process that would help Yemen and Yemenis achieve stability and live in peace, Mr. Ould Cheikh Ahmed noted.

“Reaching a practical and positive solution undoubtedly requires concessions from all sides. These concessions will reflect their commitment and efforts to reach an inclusive agreement,” the special envoy said.

“Today’s sessions were positive and promising,” he added.

Calling the present time a “critical juncture,” the special envoy highlighted that security, stability and rights for the Yemeni people are the top priorities.

“Yemenis are the beating heart of Yemen,” the envoy said.

“I am aware that the situation is critical and the conflict has been going on for a long time, but I am also certain that the Yemenis will never give up. Today, we stand closer than ever to peace,” he stressed.

Turning to the participants in the talks, the special envoy reminded them that their political positions make them responsible for the Yemeni people.

“Consult your conscience, address discord in a positive spirit and transform disputes into differences that enrich the political life while maintaining the social fabric and civil peace,” Mr. Ould Cheikh Ahmed emphasized. 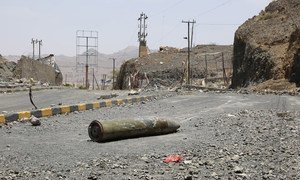 Following a three-day delay, the United Nations-brokered peace negotiations among Yemeni parties started today in Kuwait, with the aim of reaching an agreement on a clear way to end the violence and devastation in the country.