UNHCR/Benjamin Loyseau
At Ndutu refugee camp in Tanzania, Abdul Yamuremye in his tent with his wife Hadija Umugure and their family fled violence in Burundi after their house had been attacked killing Abdul's two brothers, a friend who stayed with them and her three children.
22 April 2016

One year after the crisis in Burundi began, the United Nations refugee agency today said that almost 260,000 people have fled the country, warning that the number could increase by thousands throughout the year – unless a political solution is found and a civil war averted.

According to the Office of the UN High Commissioner for Refugees (UNHCR), “to date, 259,132 people have fled the country, and we are planning our humanitarian response based on a figure of some 330,000 refugees by year's end.”

In spite of the increasing difficulty in crossing borders, people continue to arrive in neighbouring countries with reports of human rights abuses in Burundi that include torture, sexual violence, arbitrary detention and extortion.

With mass returns not currently expected soon, UNHCR will in the coming year put greater emphasis on education for children and youth, and encourage refugees to become self-sufficient at a time when budget shortfalls are leading to cuts in some assistance.

UNHCR noted that it is seeking almost $175.1 million for its Burundi crisis operations this year, yet has to date only received $47.8 million – or some 27 per cent.

“This means we are struggling to provide even the basics such as shelter, household items and latrines. The provision of services such as specialized counselling, care for the disabled and elderly, protection of the environment and even primary health care may also fall by the way side,” he explained.

The situation one year in is tense and marked by sporadic violence that has killed more than 400 since last year. At least 25,000 people having fled to safer areas in Makamba, Rutana and Kirundo, however freedom of movement is becoming onerous.

While people continue to cross to neighbouring countries from the provinces of Ruyigi, Muyinga, Kirundo, Rutana, Makamba, Rumonge, Bujumbura and Kibitoke, small numbers have been returning spontaneously.

Meanwhile, worsening economic conditions inside Burundi threaten to exacerbate the situation, fuelling further displacement and discouraging refugees and thousands of internally displaced from returning home under.

Of the 135,941 Burundian refugees in Tanzania, more than 71,000 live in an overcrowded camp in Nyarugusu, which has become one of the largest refugee camps in the world. Already living under very hard conditions, the country continues to admit an average 130 people a day. UNHCR has put a priority on decongesting the camp.

In Rwanda, host to some 76,404 people, arrivals continue to be registered at a rate of about 130 per week. Urban refugees have been increasingly approaching UNHCR to move to Mahama camp, in the Eastern province, after spending the last of their savings to keep alive.

Uganda, where some 24,583 have sought safety, the April arrival rate has levelled off to about 25-35 a day. Last week, 167 Burundian refugees who arrived at the Nakivale settlement reported difficulties crossing borders, especially without papers.

At the same time, refugees in the Democratic Republic of the Congo, which currently accommodates 22,204 people, have steadily increased – with the first three months of this year registering 900 people each. Most are staying at the Lusenda camp, which, with a capacity for 18,000, now hosts more than 16,000 refugees.

Despite space restrictions and capacity problems, these countries generously continue to accept people, but will need increased international support to host more.

“We urge host countries to keep their doors open and donors to continue and step up support for the refugee response,” UNHCR concluded. 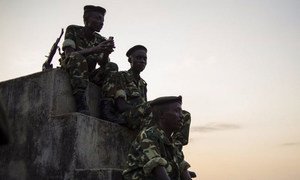 The United Nations human rights chief today warned of a “sharp increase in the use of torture and ill-treatment in Burundi” and voiced concerns about worrying reports of the existence of illegal detention facilities, both in Bujumbura and in the countryside.