Expressing ‘grave concern’ at the fragility of the security situation in Somalia, the United Nations Security Council has called for progress on the constitutional review process in the country, and for the completion of the Federal State formation process to be accelerated.

In a press statement issued following a briefing to the Council earlier this week by the President of Somalia, Hassan Sheikh Mohamud, and the Special Representative of the Secretary-General for Somalia, Michael Keating, the Council underlined that a “peaceful, transparent and inclusive” electoral process in 2016 will mark a “historic step forward” for all Somalis, and will be fundamental for the country’s continued progress towards democracy and stability.

Expressing its full support for the Special Representative and the UN Assistance Mission in Somalia (UNSOM), the 15-member body recalled its expectation that there will be no extension of the electoral process timelines in Somalia, underlining the importance of good faith cooperation between federal and regional authorities in the country on these issues.

The Council also commended President Mohamud and the Federal Government of Somalia for the political progress made in the country in the past four years, in particular the agreement on a model for the electoral process planned for August 2016, which it said should be a “stepping stone” to one-person-one-vote elections in 2020.

In addition, the Council commended the Federal Government’s commitment to reserve 30 per cent of seats in the Upper and Lower Houses of Parliament for women, calling on the Parliament to swiftly endorse the implementation plan decided by the National Leadership Forum as soon as possible.

Reiterating their “strong condemnation” of attacks and recruitment of children by the terrorist group Al-Shabaab, the members of the Council also underlined the importance of the continuation of offensive operations against Al-Shabaab by the Somali National Army and the African Union Mission in Somalia (AMISOM), in “a well-coordinated manner” and in line with the qualitative improvements requested in Council resolution 2232 (2015), and in full compliance with international humanitarian law and the protection of civilians.

Expressing its full support for this process, the Council encouraged the Government to intensify efforts, urging Member States to contribute to the process and reiterating that security sector reform is critical to enable Somalia to assume control of its own long-term security.

In addition, the Council expressed concern about the fragile humanitarian situation in Somalia and the humanitarian impact of El Niño, urging all parties to facilitate “timely, unhindered and safe” access for humanitarian actors and to find durable solutions for the 1.1 million Somalis who are internally displaced. 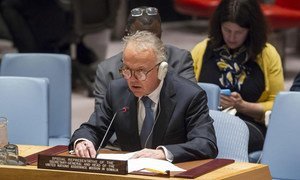