UNHCR/Santiago Arcos
Chamanga, Ecuador after the 16 April 2016 earthquake. Hundreds of people have been killed and widespread damage has been reported up to 190 miles away from the epicentre.
22 April 2016

The Government of Ecuador and the United Nations today launched an urgent $72.7 million appeal to respond to the 7.8 magnitude earthquake that struck coastal provinces of north-west of the country less than a week ago, aiming to kick-start life-saving assistance, protection services and early recovery support to assist approximately 350,000 people over the next three months.

The earthquake’s epicentre was close to the town of Muisne and 170km northwest of the capital Quito. Although the epicentre is in a remote rural area, several towns of coastal provinces are affected. More than 300 aftershocks have been registered to date, according to the UN Office for the Coordination of Humanitarian Affairs (OCHA).

Additionally, 25,376 people are in collective shelters. Many roads, bridges and other key infrastructure were damaged resulting in logistics and communications challenges in some areas. Government and international teams are currently assessing the situation and will reach most of the affected areas within the coming days; thus, official figures on impact and damage are expected to rise. It is estimated that approximately 720,000 people have been affected by the earthquake and require assistance, out of over 7 million people living in the six affected provinces.

“Many people have lost their homes, their livelihoods. But I was struck by their resilient spirit,” UN Emergency Coordinator Stephen O’Brien said yesterday, wrapping up his two-day visit to the country. “The actions of the Government of Ecuador and local communities themselves saved many lives.”

Mr. O’Brien stressed that “people urgently need food and water, and basic health care. Children need a place to continue their studies. Families need support to rebuild their lives. The humanitarian community stands ready to support the Government to ensure that critical needs are met.”

Meanwhile, the UN refugee agency is preparing to distribute core relief items today to the people affected by the earthquake.

The Office of the UN High Commissioner for Refugees (UNHCR) said in a press statement that “materials, including some 900 tents, 15,000 sleeping mats, 18,000 repellent-impregnated mosquito nets, plastic sheets and kitchen sets left UNHCR’s global logistics hub in Copenhagen and arrived in Quito on Wednesday night.”

The supplies were then loaded onto 16 trucks and transported over badly damaged roads to Santo Domingo, in the centre of the country, for distribution today to Manta, Pernales and Portoviejo – in the Manabi Province.

In addition to already having dispensed tents and plastic sheeting to Esmeraldas, Jama and Canoa, UNHCR has begun constructing a camp to provide essential shelter to scores of displaced families.

Subject to agreement with local authorities, UNHCR aims to deliver aid to some 40,000 refugees, asylum-seekers and local citizens within the communities most affected by the earthquake.

“In the worst-affected areas, approximately 40,000 people still need emergency relief items, such as tents and jerry cans. These people are particularly at risk, as many are refugees from neighbouring Colombia,” the statement said.

Ecuador hosts more refugees than any other country in Latin America, providing international protection to over 200,000 Colombian refugees, many of whom had settled in the earthquake-affected areas.

UNHCR underscored its commitment to helping the Government of Ecuador and its people with support for refugee and host community populations. 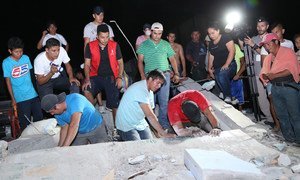 The top United Nations relief official wrapped up his two-day mission to Ecuador yesterday, announcing that he is releasing $7 million from the UN’s Central Emergency Response Fund to assist people affected by the deadly earthquake that struck on Saturday, while calling for more support to vulnerable communities.