At UN, Forest Whitaker calls on leaders to ensure benefits of global goals ‘touch everyone’

Peacebuilding advocate and Academy Award-winning actor Forest Whitaker addressed world leaders today at the United Nations, asking them to ensure that the benefits of the Sustainable Development Goals (SDGs) can touch everyone worldwide.

Peacebuilding advocate and Academy Award-winning actor Forest Whitaker addressed world leaders today at the United Nations, asking them to ensure that the benefits of the Sustainable Development Goals (SDGs) can touch everyone worldwide.

Last September, UN Member States adopted the 2030 Agenda for Sustainable Development which features the 17 global goals to wipe out poverty, fight inequality and tackle climate change over the next 15 years.

As Special Envoy for Peace and Reconciliation for the UN’s Educational, Scientific and Cultural Organization (UNESCO) as well as one of 17 SDG advocates appointed by Secretary-General Ban Ki-moon in January, Forest Whitaker took to the podium of the UN General Assembly at the opening of a High Level Thematic Debate on achieving the goals.

“[I wanted to get leaders] to, in an inclusive way, have the people themselves help to push forward these SDGs, to give the individuals this concept that they need to have of empowerment to know that they actually can make a difference and make a change in some of these motions,” Mr. Whitaker said at a press conference.

Forest Whitaker, UNESCO Special Envoy for Peace and Reconciliation, speaks to UN News on why it is important the Sustainable Development Goals are met.

His second objective, he said, is to get leaders to help “swarms of people” around the world come together to move the important agenda forward for the planet. Since founding his peace initiative, Mr. Whitaker has been involved in empowering youth, especially in Uganda, South Sudan, Mexico and the United States.

“The Agenda deals with hunger, to eliminate it, eliminating poverty, educating our people, allowing women to have complete gender rights along with everyone. It’s been an exciting time to be able to talk to [leaders] today,” he said.

“Throughout history and throughout times, it’s the groups that push things forward. Of course we have to have those leaders who will point a way, a direction for us to go, and then those others who are with them, to be able to push forward the Agenda and become the mechanisms that can make it work. So I’m very optimistic that we can do this,” he added, assuring that “we can make things happen.” 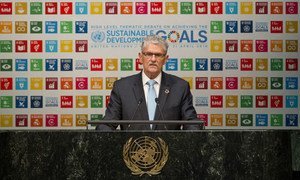 The President of the United Nations General Assembly today called on the international community to take action on the new UN sustainable development agenda in order to begin a transformation for the benefit of all people and the planet, or risk failure that will be felt for generations to come.