The panel, which was launched at the World Economic Forum in Davos last January, aims to mobilize effective action to accelerate the implementation of Sustainable Development Goal 6 (SDG6), which focuses on ensuring the availability and sustainable management of water and sanitation for all, at a time of unprecedented challenges.

The newly appointed panel members are:

“Ensuring water and sanitation for all is crucial for reducing poverty and achieving other Sustainable Development Goals,” said Mr. Ban in a statement issued by his spokesperson, through which he urged all partners to mobilize behind SDG 6 with political, financial and technological support.Today, more than 2.4 billion people lack access to improved sanitation and at least 663 million do not have access to safe drinking water. Poor sanitation, water, and hygiene lead to about 675,000 premature deaths annually, and estimated annual economic losses of up to seven per cent of gross domestic product (GDP) in some countries.

Floods and droughts already impose huge social and economic costs globally, and climate variability will make water extremes worse. If the world continues on its current path, projections suggest that the world may face a 40 per cent shortfall in water availability by 2030. The consequences of such stress are local, transboundary and global in todays interconnected world.

The panel will provide the leadership required to tackle these challenges and champion a comprehensive, inclusive and collaborative way of developing and managing water resources, and providing improved access to clean water and sanitation.

“Growing cities and populations, as well as a changing climate, are placing unprecedented pressures on our water resources,” said Mr. Kim. “Addressing this challenge, and ensuring that we can provide clean water and sanitation for all, requires the kind of global action, strong leadership and commitment shown by the members of the High Level Panel on Water.” 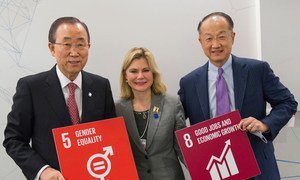