Nepal: one year after earthquake, UN food relief agency focuses on most vulnerable

OCHA/Tilak Pokharel
At the Jalbire distribution centre in Nepal, each family received cooking oil, rice and lentils, which are Nepal's staple food.
21 April 2016

A year after an earthquake in Nepal that killed more than 9,000 people and led to damages and losses estimated at $7 billion, the United Nations World Food Programme (WFP) said today that it is working with the Government so those most vulnerable to food insecurity are not left behind.

“People who were the worst off before the quake are the ones who lost the most,” said Pippa Bradford, WFP Representative and Country Director. “Ensuring that support targets these households is vitally important so that no one gets left further behind.”

In the past year, irrigation systems were built or repaired on 546 hectares of agricultural land, 729 kilometres of feeder roads were repaired, and 1,714 kilometres of mountain trails were fixed, the agency said.

Despite improvements in food security in quake-affected areas, due in part to humanitarian assistance, WFP noted that significant pockets of vulnerability remain. One quarter of the population in Nepal lives on less than $1.25 a day and, on average, spends 60 per cent of their income on food, making it hard for them to cope with shocks such as disasters and soaring food prices.

WFP said it just launched a three-year development programme focusing on vulnerable groups including female-headed households and ethnic minorities. The agency said its work will support the Government's livelihood recovery strategy in the sectors of community infrastructure, food security and agriculture, nutrition and disaster risk reduction.

The agency also plans to expand its emergency preparedness measures. One month before the earthquake, WFP established a Humanitarian Staging Area next to Kathmandu airport, which became the hub for emergency aid in the early response.

WFP said it is estimated that this facility enabled survivors to receive emergency supplies weeks faster than would otherwise have been possible, and so it plans to continue developing the facility in Nepal.

“We cannot afford not to invest in emergency preparedness,” said Ms. Bradford. “Disaster can strike Nepal at any time, and we need to be ready.”

As lead of the logistics cluster, during the emergency response WFP coordinated the transportation of relief materials for more than 160 organizations, from entry into the country through to delivery by foot or mule to the most remote areas. 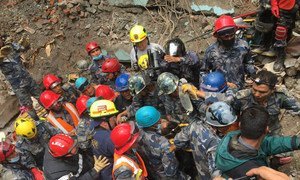 The Asia-Pacific region continued to be the world's most disaster-prone region in 2015, requiring a paradigm shift from a response-recovery governance to a risk-sensitive development approach, according to a new United Nations report.