UNICEF/UN017164/Castellano
On 17 April 2016, people search through rubble caused by the earthquake in Pedernales canton in Manabí province of Ecuador.
21 April 2016

The top United Nations relief official wrapped up his two-day mission to Ecuador yesterday, announcing that he is releasing $7 million from the UN’s Central Emergency Response Fund to assist people affected by the deadly earthquake that struck on Saturday, while calling for more support to vulnerable communities.

“My thoughts are with the people of Ecuador as they deal with the loss of loved ones, and devastation caused by Saturday’s earthquake and aftershocks,” noted Under-Secretary-General for Humanitarian Affairs and Emergency Relief Coordinator Stephen O’Brien in a

“Many people have lost their homes, their livelihoods. But I was struck by their resilient spirit. The actions of the Government of Ecuador and local communities themselves saved many lives,” he added.

According to the UN Office for the Coordination of Humanitarian Affairs (OCHA) which Mr. O’Brien heads, hundreds have been killed, thousands injured and over 720,000 people are affected. The Government, local emergency responders, the Red Cross and other organizations are working together to provide people with food, drinking water, shelter, emergency medical assistance and other basic services, including restoring electricity.

Visiting the towns of Manta, Canoa, Jama, and Pedernales in the eastern coastal region and Portoviejo inland, the Emergency Relief Coordinator met people who had lost everything in the earthquake.

“I met many people living in the open or sheltering in the remains of their homes, exposed to the weather,” he said. “Medical facilities and items are urgently needed for people who were injured, as well as food, clean water and basic sanitation.”

In Manta, Mr. O'Brien met Rosa, a teenager, rescued after four days, but now in need of immediate and long-term medical and psycho-social support. In Tarqui, he listened to the story of Ernesto, who saw his house collapse from across the street, killing his wife and injuring his children. In Pedernales, he met the head of the Chilean search and rescue team, the first international responders on the scene trying to find survivors in those vital early hours.

During his two-day visit, the Humanitarian Chief met with Foreign Minister, Chancellor Dr. Guillaume Long, Minister of National Defense, Ricardo Patiño and other ministers and senior officials leading the earthquake response, to discuss how best to support the national relief efforts.

OCHA stressed that people urgently need safety, food and water, and basic health care. Children need a place to continue their studies, and families need support to rebuild their lives. The humanitarian community stands ready to support the Government to ensure that critical needs are met, Mr. O’Brien underlined.

“The United Nations and our international partners are supporting the Government by mobilizing international support for immediate and life-saving assistance, to bolster relief, intensify recovery and help people get their lives and livelihoods back on track,” he said. “Today I allocated $7 million from the Central Emergency Response Fund to kick-start vital operations in logistics, shelter, water, sanitation and hygiene, and emergency health.”

The Emergency Relief Coordinator noted that the UN and partners would be launching the full Flash Appeal for the Ecuadorean relief operation tomorrow, to help some 350,000 people with immediate relief and initial recovery assistance within the next three months. 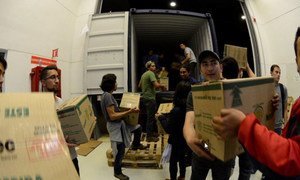 United Nations Emergency Relief Coordinator Stephen O’Brien said that more than 21,000 people are in need of immediate shelter following the 7.8 magnitude earthquake that struck Ecuador on Saturday night, while the Government has stepped up recovery efforts in conjunction with several UN agencies.