UNODC
Alternative development products now sold at a vending machine on the premises of UNODC's central office in Bogotá, Colombia.

18 April 2016
As part of an initiative providing assistance to family farms that depended on illicit crops for income, the United Nations Office on Drugs and Crime (UNODC) has announced that hundreds of personnel and visitors can now purchase alternative development products on the premises of its central office in Bogota, Colombia.

In a press release, UNODC said that it has implemented alternative development initiatives in Colombia for many years by providing technical assistance to more than 100,000 family farms that were previously dependent on illicit crops for income. These projects also assist farmers in selling their products in competitive domestic and international markets.

“We are therefore confident that with concrete actions such as making products available on vending machines, we support the work of thousands of farmers who have abandoned illicit crops and thus, in a way, contribute to peacebuilding,” said Bo Mathiasen, UNODC’s Representative in Colombia.

Vending machines dispensing organic coffee and chocolate drinks, as well as a variety of snacks, such as premium chocolate bars, sweets and chocolate-coated coffee beans, were installed in UNODC’s central office in February.

Once a month, a farmers’ market will sell other products for household consumption, including certified cacao products, honey and spices. Some products are also available for local delivery.

The initiative is part of a broader advocacy and marketing strategy pursued jointly by UNODC, the Inter-American Development Bank and selected Colombian alternative development enterprises to showcase the commitment of farmers to the production of competitive quality products that promote peace, security and sustainable development in rural areas.

UNODC said that plans are under way to replicate the initiative in other UN offices in Bogota and elsewhere in the country. Additionally, the strategy of supporting alternative development will potentially spread to state agencies, such as the Colombian Presidential Agency of International Cooperation.

Alternative development is a strategy aimed at reducing and eliminating illicit crops and other illegal markets by promoting sustainable income-generating activities and enhancing the rule of law. The success of the strategy requires strong and long-term political will at both central and local government levels, UNODC noted.

Including regions with illicit crops is integral to meeting broader national sustainable development objectives, including on better justice, health, education and infrastructure. Increased participation of farm communities in the planning, implementation and evaluation of strategies and programmes will be vital to the long-term success of alternative development in Colombia and elsewhere, UNODC said.

Initiatives such as this alternative development approach are among the strategies that will be discussed during a three-day special session of the General Assembly on the world drug problem, which begins tomorrow, 19 April, at UN Headquarters in New York. 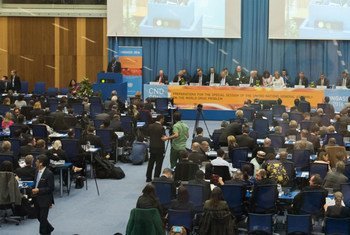 14 March 2016
Ahead of a special session on drugs at the United Nations General Assembly, senior United Nations officials today focused on the people affected by drugs and the shared international responsibility in stopping the suffering caused by these illicit substances.