UNHCR/B. Szandelszky
Members of a family gather on the floor of their dilapidated apartment in downtown Amman, Jordan.
16 April 2016

Addressing the global challenge of forced displacement and fostering greater investment in infrastructure were the main topics of discussion today as United Nations Secretary-General Ban Ki-moon spoke to leaders in Washington, D.C., at the Spring Meetings of the International Monetary Fund and the World Bank Group.

“Supporting States in addressing large movements of refugees and migrants is an issue ripe for more concerted multilateral action,” the Secretary-General told the 93rd meeting of the Development Committee. He was joined by President of the World Bank Group, Jim Yong King, and Christine Lagarde, Managing Director of the International Monetary Fund.

“We must strengthen international cooperation mechanisms, and boost our collective work,” he said, noting that Governments are struggling for solutions and often responding by shutting borders, detaining asylum seekers and migrants, and other measures.

To strengthen support, the UN will hold a high-level discussion on 19 September in New York to discuss ways to address large movements of refugees and migrants.

In addition, next month, Mr. Ban will convene the World Humanitarian Summit in Istanbul, Turkey, for world leaders to come together with the private sector, civil society, academia and others, to find new ways to address the root causes of humanitarian challenges. As part of the Summit, there will be a high-level round table on forced displacement, and a special session on migration.

In today's speech, Mr. Ban pointed to six areas for “immediate action” to share challenges and obligations while maintaining the international community's commitment to sustainable development.

He called for countering xenophobic narratives and sharing responsibilities in a more equitable, predictable and transparent way.

“We must better support countries that are hosting large numbers of refugees, including through your excellent new initiative of offering concessional loans to middle-income countries hosting large refugee populations,” he said.

This includes, for example, the World Bank's recent announcement that it will offer Jordan $100 million in financing at rates usually reserved for poorest countries, to create some 100,000 new jobs for Jordanians and Syrian refugees over the next five years.

Mr. Ban also highlighted the need to create “safe, orderly and regular pathways” for refugees and migrants, enhancing cooperation to fight traffickers and smugglers, and continuing to fund humanitarian and development projects hand-in-hand.

Calls for investment in infrastructure

Earlier today, Mr. Ban spoke at an inaugural meeting of the Global Infrastructure Forum on the need for more investment to close gaps in electricity, water and sanitation access.

The Forum is one of the major deliverables of the Third International Conference on Financing for Development held last year in Addis Ababa, Ethiopia. It was created to identify and address infrastructure gaps, highlight opportunities for investment and cooperation, and work to ensure that projects are environmentally, socially and economically sustainable.

Mr. Ban said that together, the Addis Ababa Action Agenda, the Paris Climate Change Agreement which will be signed in New York this Friday, and the 2030 Sustainable Development Agenda are international commitments “to transform the global economy, expand opportunities, and leave a healthier planet for future generations.”

The Forum's role is to improve alignment and coordination among established and new infrastructure initiatives, bringing together multilateral and national development banks, UN agencies, development partners and the private sector.

All of which allows “for a greater range of voices to be heard,” he underscored.

He noted also that the Forum should also work to ensure that all infrastructure investments are environmentally, socially and economically sustainable.

Also today, Mr. Ban addressed the Ministerial Meeting of the Least Developed Countries. Addressing the so-called LDCs, which also include a group known as the Small Island Developing States, Mr. Ban called for their voice to be heard in all global decision-making and norm setting processes.

The UN chief urged the participating Governments to attend a high-level meeting in Antalya, Turkey, at the end of May, which will focus on the development of LDCs. 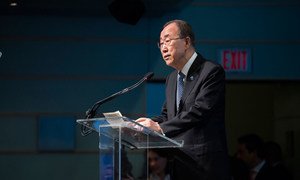 ‘Refugees have a right to asylum – not bias and barbed wire,’ Ban says in Washington

As the world faces the biggest refugee and displacement crisis of our time, United Nations Secretary-General Ban Ki-moon today reiterated a call to leaders across Europe and throughout the world to show greater solidarity as they strive to combat the deeper roots of conflict and continue to work towards securing human rights for all.