UN Photo/UNHCR/Roger LeMoyne
Roma civilians on the move in search of safety, inside Kosovo.
15 April 2016

Two United Nations independent experts today called on the world body to hold the UN Interim Administration Mission in Kosovo (UNMIK) accountable for leaving Roma families exposed to lead poisoning in camps for those internally displaced in the territory.

The Human Rights Advisory Panel of UNMIK, established in 2006 to examine complaints of alleged human rights violation committed by the Mission, made their opinion public last week.

A press release issued by the Office of the UN High Commissioner for Human Rights (OHCHR) recalled that during 1998 and 1999, thousands of Roma were forced to flee by the armed conflict between the Serbian forces and the Kosovo Liberation Army and other Kosovo Albanian armed groups. Many became internally displaced persons (IDPs) or refugees in neighbouring countries and in Europe.

IDP camps were established in the late 1990s close to the Trepca mining and smelting complex, known to be the cause of lead contamination and other forms of toxic contamination of the surrounding areas since the 1970s. The camps, which were intended to provide only temporary accommodation up to 90 days, were in place for several years. The opinion of the Panel highlights the extremely poor conditions of the camps, as its inhabitants often lacked running water, electricity, heating, adequate healthcare or access to food.

“I have been following this case since the beginning,” said the UN Special Rapporteur on minority issues, Rita Izsák-Ndiaye. “It is disheartening that in the meantime lives, had been lost and many had suffered serious health consequences.”

OHCHR noted that this case was brought up in 2008 by a group of 138 members of the Roma, Ashkali and Egyptian communities in Kosovo who were initially placed in three IDP camps – Žitkovac, Èesmin Lug and Kablare – after the Roma Mahala (neighbourhood) had been destroyed in South Mitrovica in 1999.

“I am glad that justice is being now delivered to one of the most deprived communities who had to suffer conflict, displacement and negligence,” the human rights expert added. “The opinion of the UN Panel expresses a breach of international obligations by the UNMIK and I hope that the UN will see it as an important opportunity to hold itself accountable.”

The Panel recommends UNMIK to publicly acknowledge, including through the media, its failure to comply with applicable human rights standards in response to the adverse health condition caused by lead contamination in the IDP camps, and to compensate victims for both material and moral damage.

The Special Rapporteur on the human rights of internally displaced persons, Chaloka Beyani, who visited the affected families in North Mitrovica in October 2013, stated: “I hope that a public apology will be made to the complainants and their families and that swift action will be taken to provide redress to victims, to demonstrate that the UN does fully promote and ensure respect for human rights of all, particularly those of internally displaced persons involved.”

He also welcomed the Panel advice that its findings and recommendations on this case be shared with UN bodies working with refugees and IDPs as a guarantee of non-repetition.

The Panel’s opinion recognizes that despite the fact that UNMIK had commissioned a report in 2000 which found extremely elevated blood lead levels of the affected community members living in the IDP camps, UNMIK did not make the report public and failed to take sufficient action to address the risks of lead exposure in the camps.

According to the Panel, the World Health Organization (WHO) had warned in 2004 about the chronic irreversible effects of lead on the human body, urging UNMIK to immediately evacuate children and pregnant women from the camps, but no submission or documentation was provided by UNMIK indicating what specific actions were taken in response to WHO’s findings and recommendations. 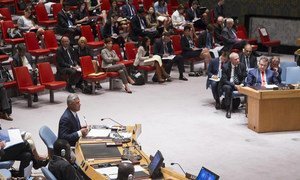 The enormous strides already taken by Kosovo and Serbia through the European Union-facilitated dialogue demand continuing commitment from both the parties and the international community, the United Nations Security Council was told today.