Simone D. McCourtie/World Bank
A child receives an ear exam as part of an overall health check up in Bolu, Turkey, 4 June 2009.
14 April 2016

A new United Nations Children’s Fund (UNICEF) report presents evidence on the ways inequality is affecting children in high income countries, in areas such areas as education and life satisfaction – with Denmark at the top and Israel and Turkey ranking the lowest overall.

Innocenti Report Card 13, Fairness for Children: A league table of inequality in child well-being in rich countries, ranks 41 countries that are part of the European Union and the Organisation for Economic Co-operation and Development (OECD) according to how far children at the bottom of the distribution fall below their peers in the middle. The report looks at bottom end inequality of income, educational achievement, self-reported health and life satisfaction.

“The Report Card provides a clear reminder that the well-being of children in any country is not an inevitable outcome of individual circumstances or of the level of economic development but is shaped by policy choices,” said Dr. Sarah Cook, Director of the UNICEF Office of Research – Innocenti, in a press release.

“As our understanding of the long term impact of inequality grows, it becomes increasingly clear that governments must place priority on enhancing the well-being of all children today, and give them the opportunity to achieve their potential,” she added.

The Office of Research – Innocenti is UNICEF’s dedicated research centre. It undertakes research on emerging or current issues in order to inform the strategic directions, policies and programmes of UNICEF and its partners, shape global debates on child rights and development, and inform the global research and policy agenda for all children, and particularly for the most vulnerable.

The Centre’s latest research shows that Denmark is at the top of the overall league table with the lowest inequality among children. Israel ranked lowest across all domains. In 19 out of 41 countries covered by the data, more than 10 per cent of children live in households with less than half the median income.

Meanwhile, when children rank their life satisfaction on a scale of one to 10 the median score is eight; however, children at the lower end of the distribution fall far behind their peers. In every country, girls aged 13 and 15 report lower life satisfaction than boys. 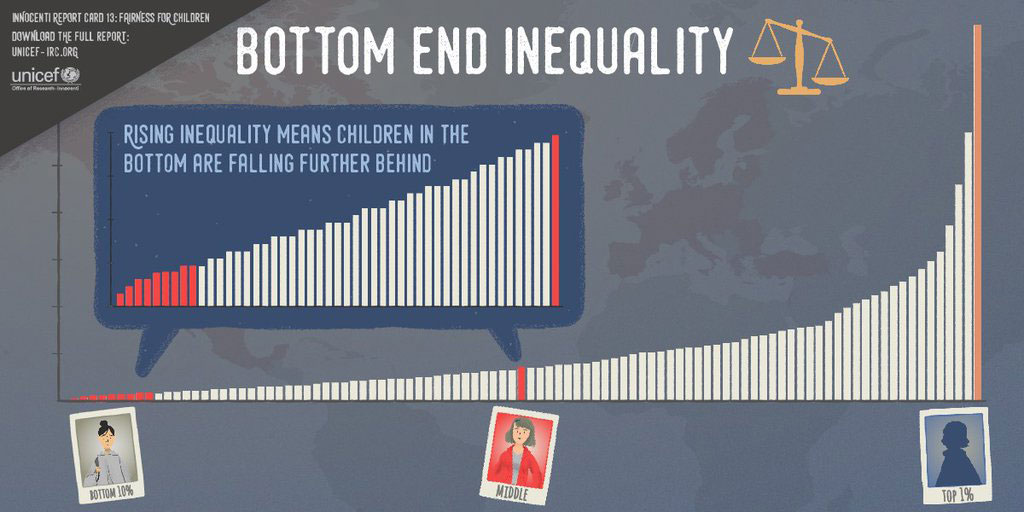 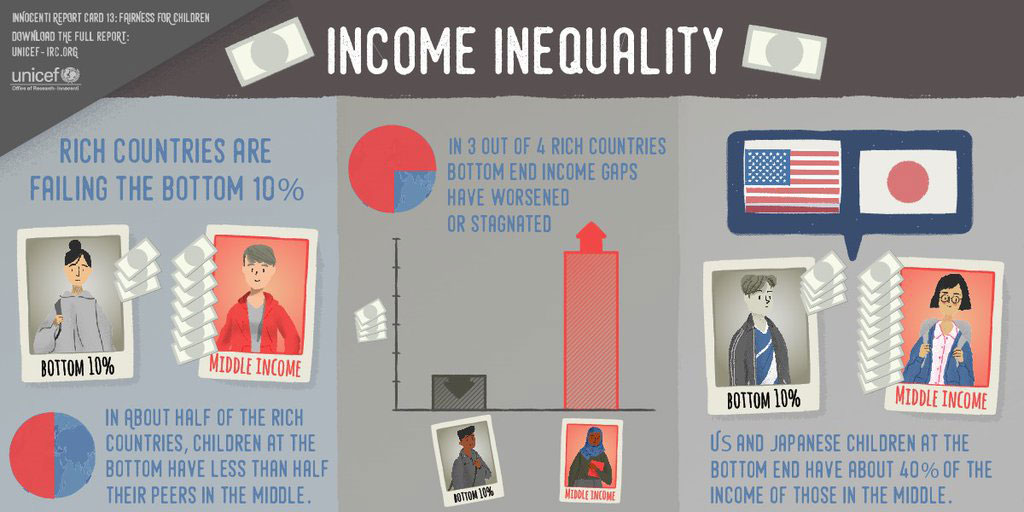 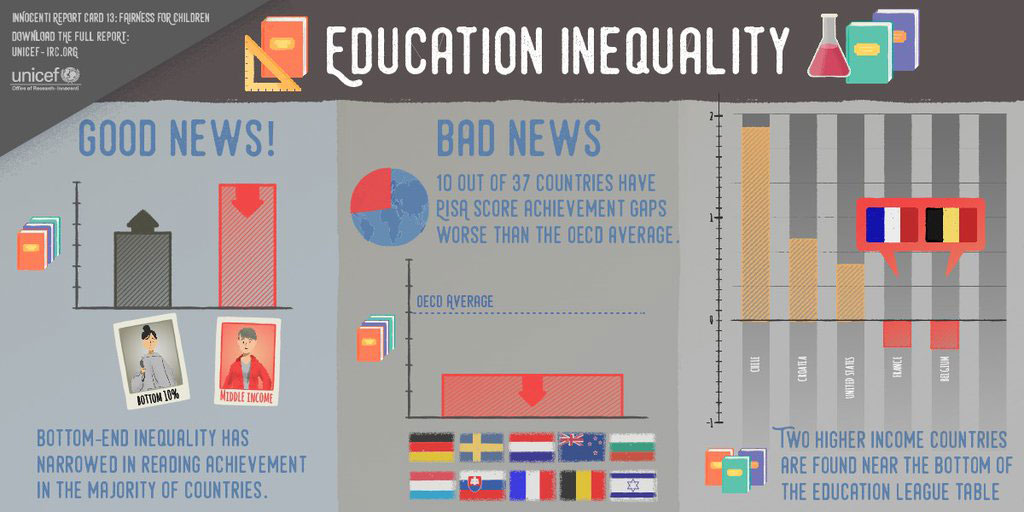 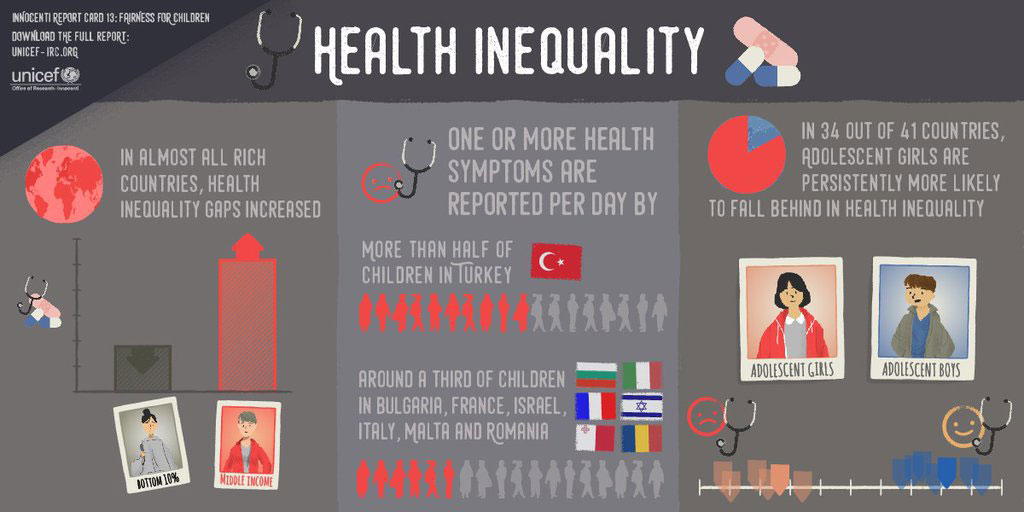 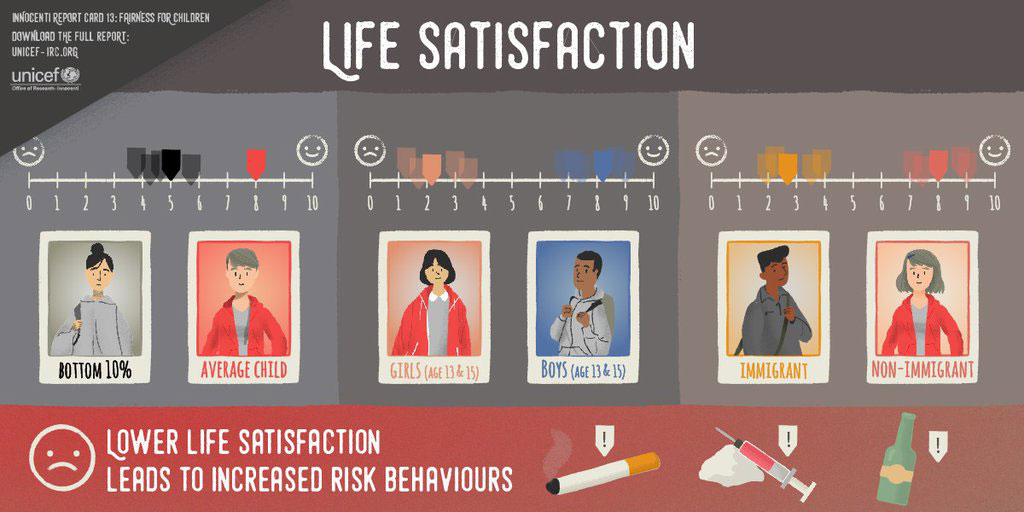 Other significant findings include that two of the world’s wealthiest countries, Japan and the United States, were positioned in the bottom third of the league table for income inequality. In both countries, the household income of a child in the 10th percentile is roughly 40 per cent of that of a child in the middle of the income distribution.

In addition, only Spain and the United States improved in all four health indicators since 2002, and only four countries – Estonia, Ireland, Latvia and Poland – managed to lower education inequality while also allowing fewer children to fall below minimum proficiency standards.

Among 10 countries where data on country of birth was collected, seven showed lower life satisfaction among migrant children.