As new round of talks begins, UN envoy for Syria says cessation of hostilities must ‘continue to give hope’

On the first day of a new round of peace talks to end the five-year conflict in Syria, the UN mediator on the crisis emphasized that despite the cessation of hostilities still holding, he is concerned about the deterioration of the security situation in some locations.

“We need to make sure, at any cost, that the cessation of hostilities, in spirit and in substance, continues to give hope to the Syrian people, because that is what made all of them believe that, in fact, even if they have to wait for the intra-Syrian talks, their lives are at least improved,” UN Special Envoy for Syria Staffan de Mistura told reporters at a press briefing in Geneva.

He indicated that the humanitarian task force set up by the International Syria Support Group (ISSG) – comprised of the UN, the Arab League, the European Union and 18 countries that have been working on a way forward since late last year – to ensure access and the delivery of aid will tomorrow be “very actively” addressing the incidents so they can be contained.

“Indeed, it will be quite appropriate I think, just because we need to make sure that if incidents in the cessation of hostilities are too often repeated they could at least deteriorate the spirit and the confidence in it,” Mr. de Mistura said.

The UN envoy recently returned from visiting Moscow, Amman, Damascus and Teheran, where he said all government officials indicated interest and support in reaching a political transition.

“The main purpose was to sound [out] the authorities in these capitals about their own advice on how to make sure that this current phase of the intra-Syrian talks are as productive or as effective as possible,” Mr. de Mistura explained.

“With all of them I have been very clear that what we aim at is actually an agenda which is based on political transition, with the issue of governance and constitution as per [Security Council] resolution 2254, and none of them actually expressed any doubt that that is the priority and agenda,” he noted, adding that “the word governance is crucial,” and no one had any objection to that point.

He also indicated that he had the first meeting today with the delegation of the High Negotiations Committee (HNC).

Meanwhile, he confirmed that the government delegation will be arriving on Friday: “To my understanding when I was in Damascus, [it] will be led again by [Bashar Ja’afari, Syrian Ambassador to the United Nations] so that we will be able to expand discussions and negotiations related to the three points of the agenda,” he said, referring to political transition, governance and constitution.

He concluded his remarks by reminding the press that it is normal for each delegation to state its strong position, but that they do come to negotiate. 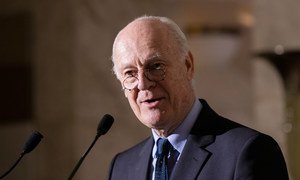 During a visit to Tehran, the United Nations mediator on the crisis in Syria underlined the importance of consulting with Iran's authorities because they “have an influence” and useful advice, while UN humanitarian agencies provided their latest updates in Geneva.