UNSMIL
Participants at the launch in Tunis of the Stabilization Facility, an initiative of the Libyan Government of National Accord (GNA), supported by UNDP and the international community.
12 April 2016

At a high-level meeting in Tunis, the United Nations Development Programme (UNDP) launched an initiative to assist with the stabilization of Libya and its new unity Government, the UN Support Mission in Libya (UNSMIL) said today.

The initiative, called the Stabilization Facility for Libya, is an undertaking of the Libyan Government of National Accord, supported by UNDP and the international community, UNSMIL said in a statement.

“The Stabilization Facility for Libya aims to support the Libyan Government of National Accord providing very visible and tangible quick-wins to the population at the local level,” UNSMIL said.

The rehabilitation of critical infrastructure destroyed by conflict will directly improve basic service delivery, the Mission noted. The Stabilization Facility will be Libyan-led, with the Prime Minister or his representative chairing the board jointly with the UN.

“The Stabilization Facility can also support businesses that were destroyed by the conflict or degraded and are vital to whole communities, such as bakeries in places where they were destroyed and people are forced to bring bread from elsewhere,” UNSMIL said.

The interventions of the Stabilization Facility will be implemented by UNDP and will be selected based on needs assessment on the ground. The priorities will be jointly agreed among the Libyan Government of National Accord, local authorities, civil society and affected populations.

The initiative will be initially limited to specific selected localities covering the east, west and south of Libya. If funding allows, it can expand its scope to all areas of the country, UNSMIL said.

Officials at the meeting in Tunis included Taher Al-Jehaimi, Minister of Planning in the Libyan Government of National Accord; Rüdiger König, Director General of Crisis Prevention, Stabilization and Peace Building in the Federal Foreign Office of the Government of Germany; Ali Al-Za’tari, UNSMIL Deputy Special Representative of the Secretary-General; and Noura Hamladji, UNDP Libya Country Director. 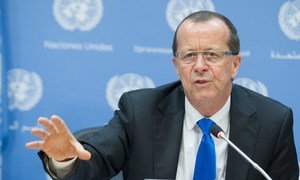 Welcoming yesterday's executive of the House of Representatives, the United Nations envoy for Libya today called on the House to convene in the Libyan port city of Tobruk over the coming days to vote on the national unity government.