During a visit to Tehran, the United Nations mediator on the crisis in Syria underlined the importance of consulting with Iran's authorities because they “have an influence” and useful advice, while UN humanitarian agencies provided their latest updates in Geneva.

“I came to Tehran to meet Deputy [Foreign] Minister Amir-Abdollahian because this is part of the preparation for the Geneva resumption of its talks, which are expected to take place already on the 13th,” UN Special Envoy for Syria Staffan de Mistura told reporters.

“What we discussed was how the future intra-Syrian talks – because they are among Syrians – can be effective,” he explained. “We agreed that what is very important is that cessation of hostilities continues, that humanitarian aid reaches every Syrian, in particular of course those besieged areas, but every Syrian, and three that a political process leading to a political transition is now crucially urgent.”

Ms. Luescher noted that over the past few weeks, WFP has been conducting trial airdrops in Jordan and has changed the types of parachutes being used as well as the packaging of the commodities and the altitude. Excellent cooperation with several partners from the international community had been key, she highlighted.

In addition, WFP reported that meteorological data has been received from several sources including the United Kingdom, Jordan, Russia and Syria. The agency said it is grateful for support from Russian, Canadian and US-based parachute companies for sourcing, technical guidance and mission planning, and reiterated its call for the lifting of all sieges to allow regular humanitarian access.

Briefing on the latest trip to Syria by the head of the International Organization for Migration (IOM), agency spokesperson Leonard Doyle said Director-General William Lacy Swing spent three days in the country visiting Homs and other parts of rural Damascus. 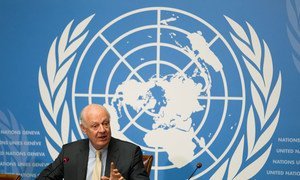 The United Nations mediator on the crisis in Syria said today that the next round of the peace talks will likely begin on Wednesday, 13 April, and is intended to be a concrete discussion leading to “a real beginning of a political transition.”