UNICEF/Sebastian Rich
In the Gire 1 camp for internally displaced people, near Yola, Nigeria, a father holds photographs of his eldest daughter, 18, and his 6-year-old son, both of whom were kidnapped by members of Boko Haram during an attack on the family’s village.
12 April 2016

TAhead of the second anniversary of the abduction of 200 schoolgirls in the town of Chibok in Nigeria, a group of United Nations and African human rights experts today appealed to Boko Haram to immediately reveal the location of the girls, and urged the Government of Nigeria to escalate its efforts to free all civilians kidnaped by the group.

Ahead of the second anniversary of the abduction of 200 schoolgirls in the town of Chibok in Nigeria, a group of United Nations and African human rights experts today appealed to Boko Haram to immediately reveal the location of the girls, and urged the Government of Nigeria to escalate its efforts to free all civilians kidnaped by the group.

“In the last two years, despite re-assurances from those at the highest level of the Nigerian Government, the parents have not seen any concrete progress in locating and liberating their daughters,” the experts said. “The lack of access to information increases the suffering of the abductees’ families through false hopes and frustrations.”

The experts said that while they understand the security considerations put forward by the authorities, which prevent the disclosure of information, they are deeply concerned that “the grievances of the families and their most basic right to be kept informed about the plight of their loved ones has largely been ignored.”

The experts believe that the Nigerian authorities should meet the parents’ demand for the designation of a focal point to liaise with the families of abducted persons and provide them with regular information and assistance.

In the past two years, several abducted civilians have either managed to escape from Boko Haram or were freed by the Nigerian army. The UN and African human rights experts welcomed these operations and urged the authorities to ensure that those who have been released are provided with adequate care, recovery and reintegration services.

The experts commended ongoing programmes such as the Safe Schools Initiative and the Victims Support Fund. “We are nonetheless seriously concerned by the absence of follow-up in the provision of care, recovery and reintegration measures for victims of sexual violence,” they noted.

“The reintegration and rehabilitation of women and children are essential in the path towards lasting peace,” the experts said, recalling the findings of a joint visit to Nigeria in January by the UN Special Rapporteurs on the sale and sexual exploitation of children, on contemporary forms of slavery, and on the right to health.

“Both the Nigerian authorities and the international community should make it clear that all the alleged crimes perpetrated by Boko Haram will be promptly, thoroughly and independently investigated, and those responsible, directly or as commanders or superiors, will be brought to justice,” the experts said.

“The declaration by the African Union making this year the African Year of Human Rights with a specific focus on women’s rights should be an additional call to action for African States and the international community to actively support Nigeria in its fight against Boko Haram and in addressing deep-rooted human rights violations such as gender-based violence and discrimination,” the experts concluded.

In related news, the UN Children’s Fund (UNICEF) reported today that the number of children involved in ‘suicide’ attacks in Nigeria, Cameroon, Chad and Niger has risen sharply over the past year, from 4 in 2014 to 44 in 2015. A report released today by the agency, entitled Beyond Chibok, shows alarming trends in four countries affected by Boko Haram over the past two years.

“Let us be clear: these children are victims, not perpetrators,” said Manuel Fontaine, UNICEF Regional Director for West and Central Africa. “Deceiving children and forcing them to carry out deadly acts has been one of the most horrific aspects of the violence in Nigeria and in neighbouring countries.”

Among the trends highlighted in the report is that between January 2014 and February 2016, Cameroon recorded the highest number of suicide attacks involving children (21), followed by Nigeria (17) and Chad (2).

In addition, the report found that over the past two years, nearly 1 in 5 suicide bombers was a child and three quarters of these children were girls. In 2015, children were used in 1 out of 2 attacks in Cameroon, 1 out of 8 in Chad, and 1 out of 7 in Nigeria.

UNICEF said that this past year, for the first time, suicide bombing attacks in general spread beyond Nigeria’s borders. The frequency of all suicide bombings increased from 32 in 2014 to 151 in 2015. Of the attacks in 2015, a total of 89 were carried out in Nigeria, 39 in Cameroon, 16 in Chad and 7 in Niger.

The calculated use of children who may have been coerced into carrying bombs has created an atmosphere of fear and suspicion that has devastating consequences for girls who have survived captivity and sexual violence by Boko Haram in north-east Nigeria, the agency stressed.

UNICEF said that as shown in recent research it conducted with International Alert, children who escaped from, or were released by, armed groups are often seen as potential security threats. Children born as a result of sexual violence also encounter stigma and discrimination in their villages, host communities, and in camps for internally displaced persons, the agency noted.

“As ‘suicide’ attacks involving children become commonplace, some communities are starting to see children as threats to their safety,” said Mr. Fontaine. “This suspicion towards children can have destructive consequences; how can a community rebuild itself when it is casting out its own sisters, daughters and mothers?”

The report assesses the impact that conflict has had on children in the four countries affected by Boko Haram. It notes that nearly 1.3 million children have been displaced; about 1,800 schools are closed – either damaged, looted, burned down or used as shelter by displaced people; and more than 5,000 children were reported unaccompanied/separated from their parents.

UNICEF said it is working with communities and families in Nigeria, Chad, Cameroon and Niger to fight stigma against survivors of sexual violence and to build a protective environment for former abductees.

The agency also noted that the response to the regional crisis remains “severely underfunded.” Thus far this year, 11 per cent of the $97 million needed for UNICEF’s humanitarian response has been received.

Donors called on to back initiatives in Borno state

In other news, the UN Office for the Coordination of Humanitarian Affairs (OCHA)

said that UN agencies and non-governmental organizations are increasing their footprint in Nigeria’s Borno State, reaching people struck by crisis in rural parts of the region. Commenting on his recent visit to north-east Nigeria, the UN Regional Humanitarian Coordination for the Sahel, Toby Lanzer, underlined that “the suffering of some 30,000 people in Bama was as acute as I have seen.”

“When faced with such suffering, we tend to focus on an emergency response, and in the case of

Bama it is right to do so, but rarely has the need for development been greater in a crisis setting

such as that of Borno,” he said. “Some UN development agencies stand ready to support communities under the leadership of the authorities.”

Borno’s capital, Maiduguri, is a city of 1 million inhabitants who are hosting 1.6 million people

Mr. Lanzer said he focused his visit on the host communities, all of whom have shown “unparalleled generosity.” He called on donors to back development initiatives in the region concurrently with the emergency response.

“Solid waste management and livelihoods are two of the most glaring needs in Maiduguri despite the strong efforts of the State authorities,” Mr. Lanzer stressed.

“As the rainy season approaches, a failure to manage waste will result in a public health crisis and exacerbate human suffering; at the same time, providing the youth vocational training is the right thing to do today, and can help prevent a deeper crisis emerging tomorrow,” he added. 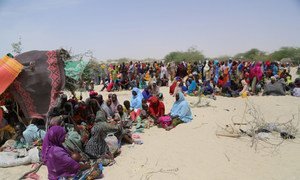 Three United Nations human rights experts today called on the Government of Nigeria to assist in the rehabilitation and reintegration of women and children who escaped or were liberated from Boko Haram captivity.