Welcoming the launch of the latest economic report on Africa, a senior United Nations official today highlighted that African countries should leapfrog “business as usual,” carbon-intensive methods of growth and instead pursue a pathway to green industrialization.

“The report strongly illustrates that pursuing green industrialization would greatly benefit the continent’s economy, identifying ways in which the use of new business models and green technologies can galvanize sustainable and inclusive growth, the creation of green jobs, and greater global competitiveness, all while protecting and increasing the productivity of Africa’s natural resources,” Maged Abdelaziz, the UN Under-Secretary-General and Special Adviser on Africa, said at the New York launch of the report at an event co-organized by his Office and the UN Economic Commission for Africa (ECA).

He also informed delegations that the report provides concrete recommendations of effective policy frameworks and actions that will enable African Governments to translate these aims into tangible results.

Additionally, the UN official emphasized that one of its greatest strengths is its timing: “2016 marks a particularly important time in Africa’s development, as the continent embarks on the implementation of the major global and regional development agendas adopted last year,” he said, referring to the 2030 Agenda for Sustainable Development and the Addis Ababa Action Agenda on financing for development.

The 2030 Agenda its 17 Sustainable Development Goals (SDGs) call for sustainable industrialization, universal access to sustainable modern energy, ending hunger through sustainable agriculture, urgent action to combat climate change and its impacts, and the conservation and sustainable use of the oceans, seas and marine resources.

Mr. Abdelaziz further insisted that the timing of the report is “powerful” because Africa is still in the early stages of its industrialization: “As such, African countries have the ability to, as the report says, ‘get it right the first time’ by capitalizing on their current low-carbon position, thus ‘leapfrogging’ past the mistakes made by their predecessors,” he underlined.

For his part, ECA Executive Secretary Carlos Lopes said there is a golden opportunity for Africa. “The cost of producing energy from renewable sources is now equal in cost to production from fossil fuels,” he said.

In addition, he noted that every other region that industrialized had gone through the fossil fuel route. So another golden opportunity is that Africa is set to be the continent with the largest demographic expansion; if the types of consumption partners that are in place are already associated with a green economy, “you will have gain that others will have to go a long way to catch.”

Meanwhile, at a launch event at UN offices in Ethiopia last week, Abdalla Hamdok, the Deputy Executive Secretary of the Economic Commission for Africa (ECA), said the continent can define and design its own pathway to industrialization based on its own realities, and learning from history and experiences of other regions.

Addressing close to 200 delegates gathered to witness the launch, Mr. Hamdok said the continent can define and design its own pathway to industrialization based on its own realities, and learning from history and experiences of other regions.

On 20 April, the Office of the Special Adviser on Africa will be co-organizing, together with the African Union Commission and the Government of Sweden, a full day High-level Forum on the theme “The Africa We Want in 2030, 2063 and Beyond.” The Forum is expected to focus on the synergies between Agenda 2063 and the 2030 Agenda, as well as the role of Africa’s development partners in helping the continent achieve the complementary aims of both agendas.

ECOSOC panel discusses link between peace and development in Africa 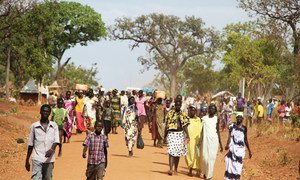