Each of the current eight candidates will be formally introduced to the General Assembly – which includes representatives from all 193 Member States, and Observers, the State of Palestine and the Holy See – in three days of informal dialogues beginning on Tuesday. The general public can ask questions through civil society members and social media.

“This is a potentially game changing process,” said Mogens Lykketoft, the Assembly’s current President, in an interview with the UN News Centre. “This will be yet another occasion to increase transparency around the whole machinery of the United Nations, through that also the influence of a broader public on what we do here.”

While on the surface, informal public discussions do not seem revolutionary, for a 70-year-old Organization that has until now had only eight Secretaries-General, all of whom were selected in a relatively closed process by the 15-member UN Security Council, this is uncharted territory.

Morgens Lykketoft, President of the General Assembly, speaks with the UN News Centre about a more transparent process of selecting and electing the next Secretary-General of the United Nations. Credit: United Nations

Two-hours of questioning, and then some

Each candidate will have a televised and webcast two-hour timeslot, starting with a short oral presentation. In addition, each candidate has already submitted, or will submit, a written statement layout out his or her vision for 2017 and beyond.

Following these introductory remarks, Member States will have either two or three minutes to ask questions on behalf of their countries or geographic grouping.

Since the hearings are classified as “informal” in the official UN records, there will be no speakers’ list, with Member States recognized on a first-come, first-served basis.

There is no model for such dialogues within the UN, which means that there is no model for the questions, either. Some Member States may end up using this time to make political statements or might speak beyond their allotted times – although Mr. Lykketoft has said that he will be watching the clock carefully.

If time remains at the end of the two-hour period, the candidate will get questions from civil society.

Informal dialogues with the candidates: What you need to know

Start on Tuesday, 12 April at UNHQ in New YorkTwo-hour time-slots, with up to three candidates speaking per dayEach candidate will have an opening statement, then take questions from Member StatesIf time allows, civil society will ask questionsDialogues will be televised, with press able to ask questions of each candidate after the dialoguesFinish on Thursday, 14 AprilNext round of dialogues may be held later this yearSecurity Council will begin deliberations in July

If all this does not suffice, each candidate can further press their case to the media at a stakeout set up outside the Assembly Hall.

In addition to traditional outlets, candidates are encouraged to take to social media. The President of the General Assembly and the UN Non-Governmental Liaison Service have created a website where people can submit questions in writing, video or audio under the hashtags #UNSGcandidates.

Questions that are shortlisted will be read out during the informal dialogues. More than 1000 questions have already been submitted, ranging from "what criteria would the candidate use to make senior appointments" to “how will your measures end world poverty” and “how will you bring peace to the Middle East.”

“Social media will play a very important role in this whole process,” Mr. Lykketoft told the UN News Centre, adding that he hopes the candidates will take the time to answer all the questions in the coming weeks and months.

“You will see civil society take a lot of additional initiatives to bring discussions with the candidates, maybe also between the candidates, in and outside these walls,” he continued.

This includes the hustings co-hosted by the Guardian in New York in London this month and in June, which are organized outside of the UN structure.

Mr. Lykketoft expressed optimism that all this will culminate “for the first time in United Nations history, in a very transparent process which hopefully also will lead to a much clearer formulation of what are we expecting from the membership of the United Nations of the challenges and competencies of the next Secretary-General.”

Given that these dialogues could potentially sway the election process, it might be assumed that there is some resistance from the Security Council – a body where 178 Member States of the General Assembly are not represented.

Mr. Lykketoft says that is not the case: “The growing understanding, even from the strongest and biggest of powers, [is] that the most existential problems on this globe can only be solved in cooperation. And therefore, we need a strong United Nations, and that ought to be reflected in the way we select and the competencies we demand from the new Secretary-General.”

From the signing of the UN Charter to today 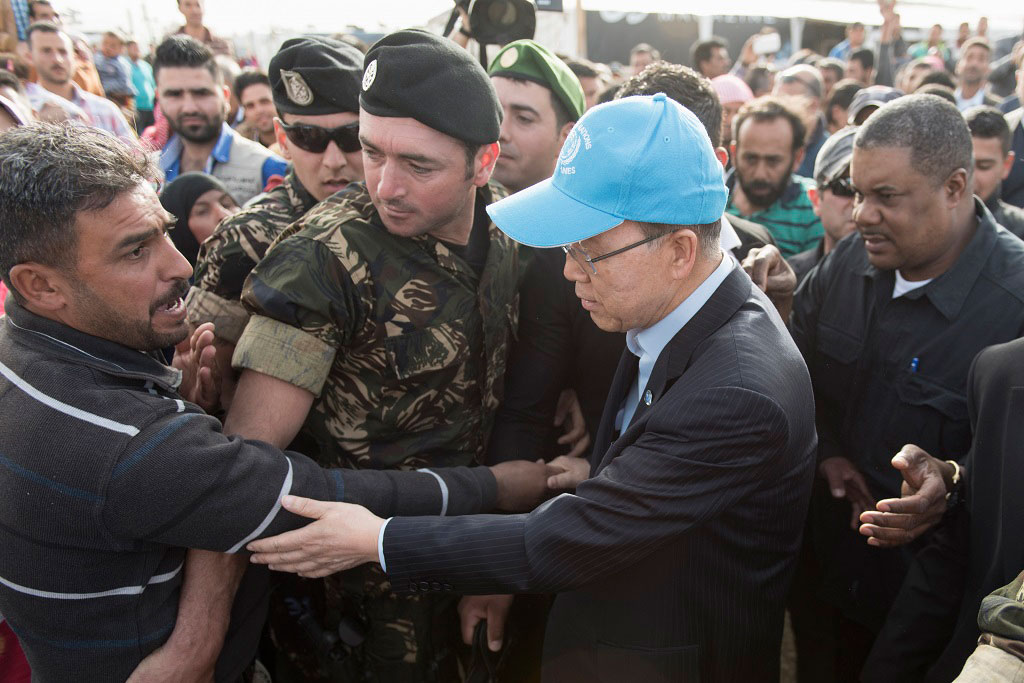 Ban Ki-moon (Republic of Korea)
Term of Office: 2007-2016
Secretary-General Ban Ki-moon connects with a refugee at a Syrian settlement in the Beqaa Valley, eastern Lebanon, in March 2016. UN Photo/Mark Garten 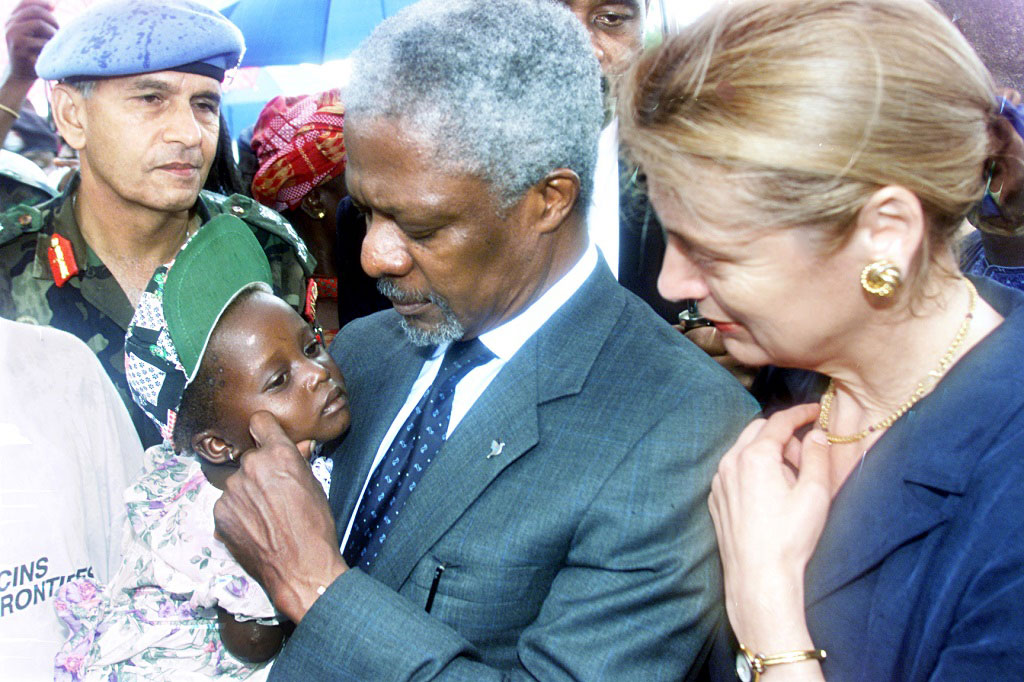 Kofi A. Annan (Ghana)
Term of Office: 1997-2006
Former Secretary-General Kofi Annan on his first visit to East Timor after it was racked by post-referendum violence, in July 1999. UN Photo/Eskinder Debebe 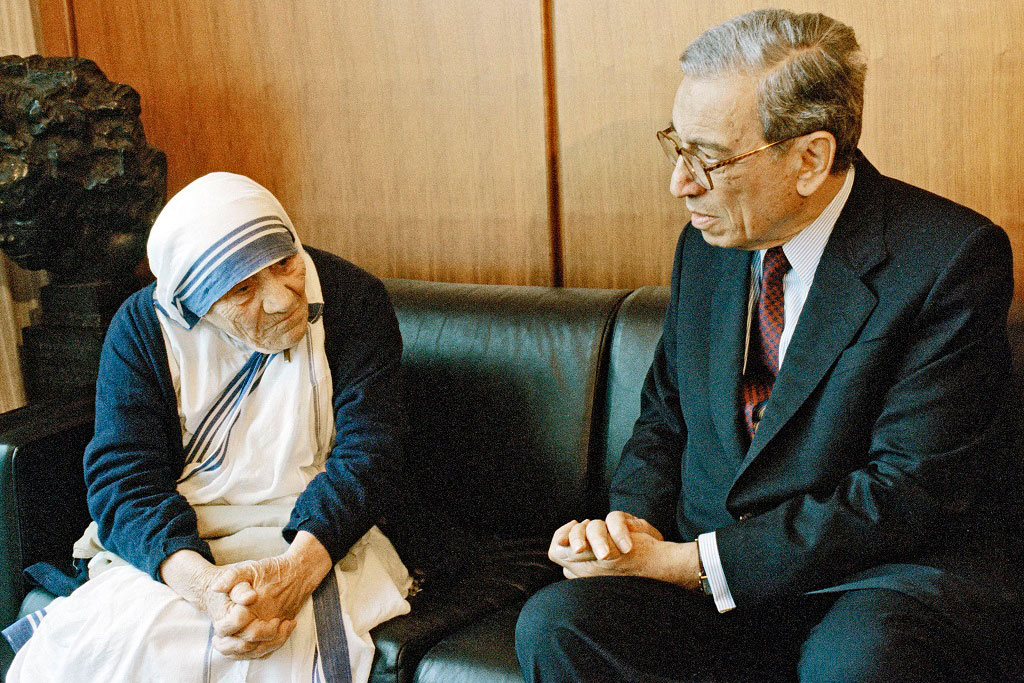 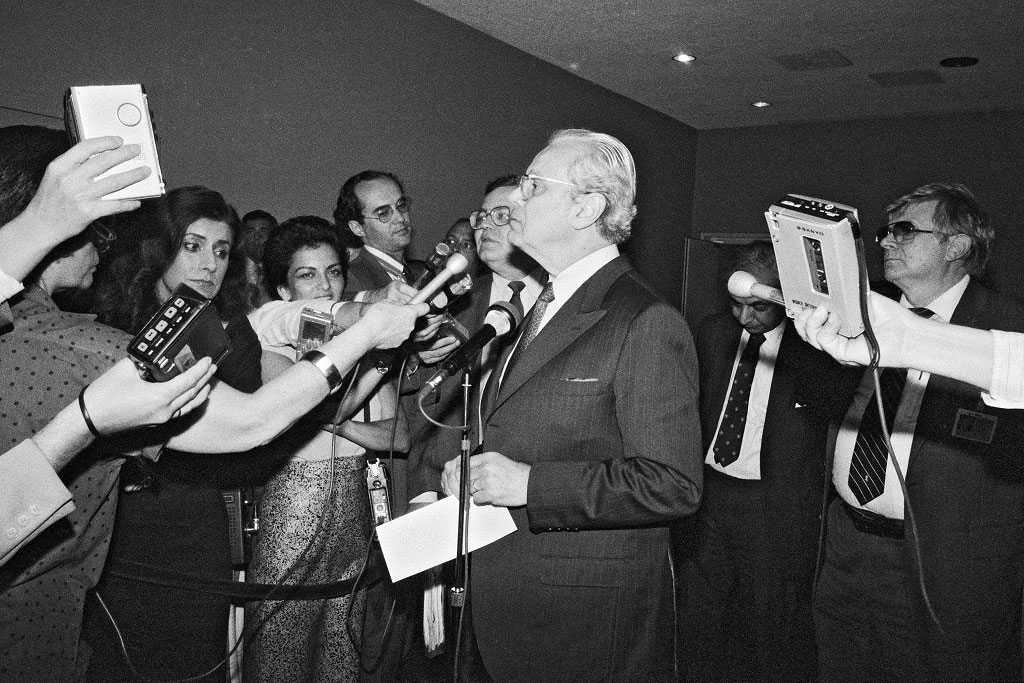 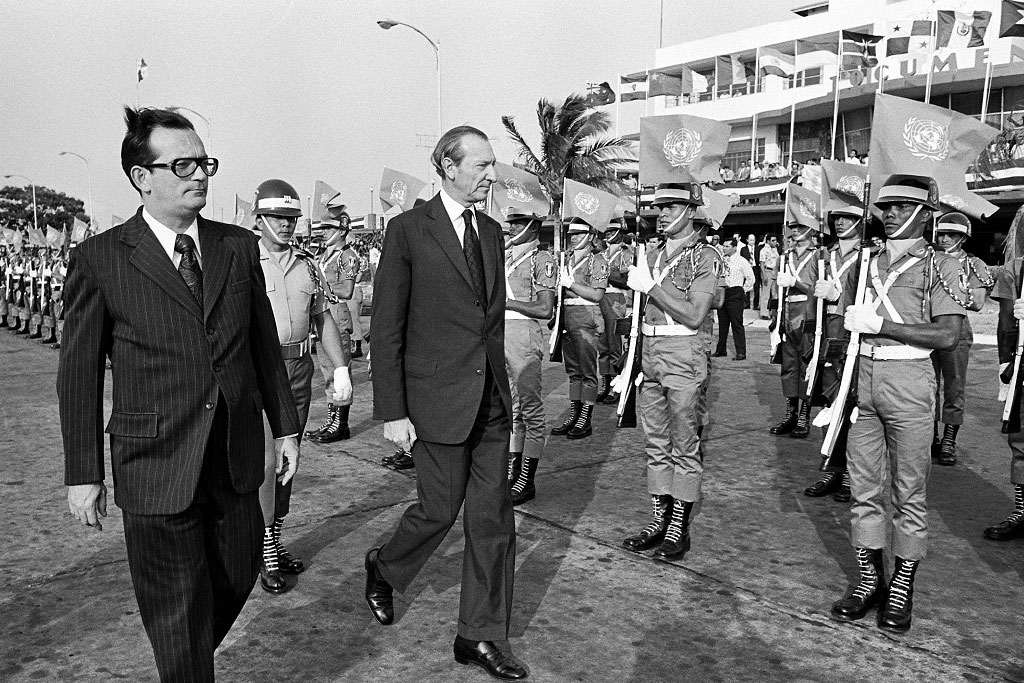 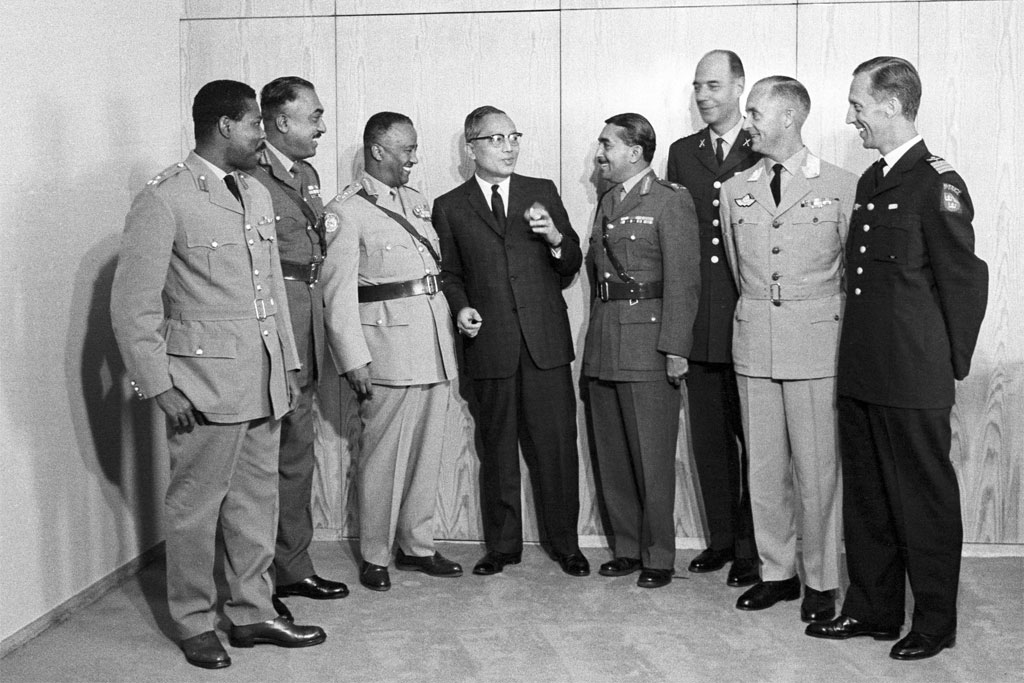 U Thant (Myanmar)
Term of Office: 1961-1971
Former Secretary-General U Thant meeting with Commanders of the United Nations forces in the Congo and senior military officers from the UN Operation in the Congo (ONUC), in April 1963. UN Photo/MH 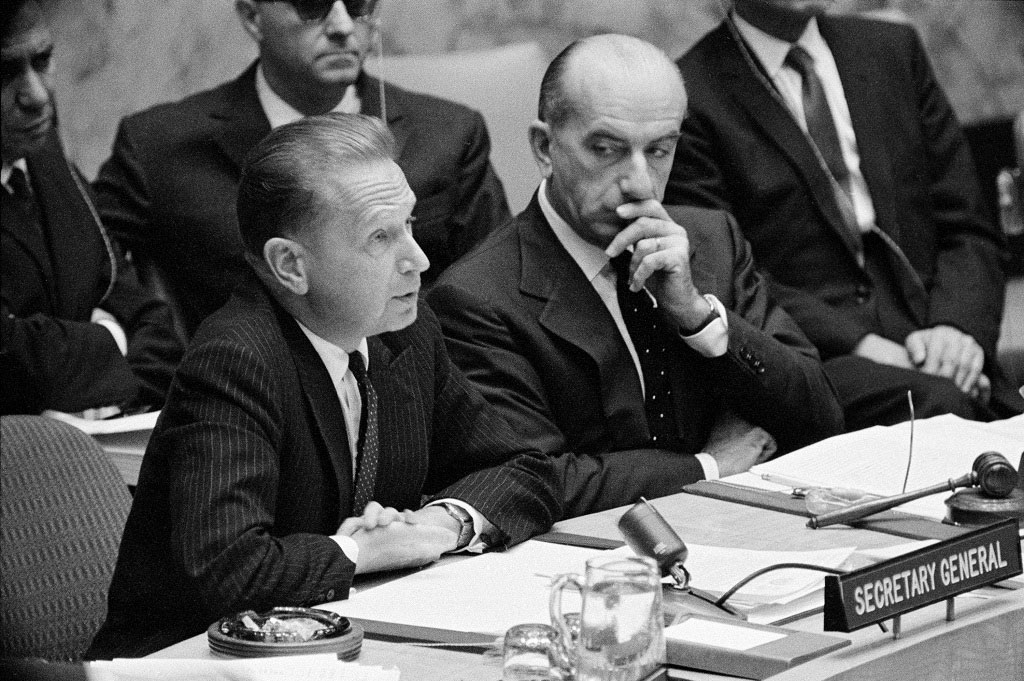 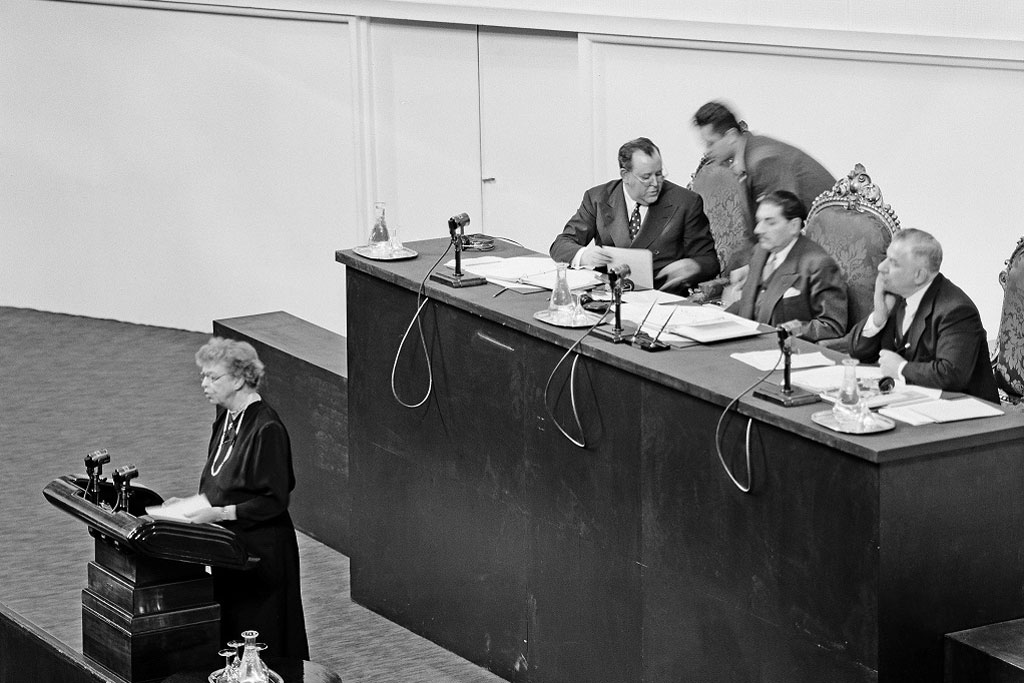 The UN Charter, signed in 1945 as the foundation of the Organization, says relatively little about how a Secretary-General is to be selected, aside from Article 97, which notes that the candidate “shall be appointed by the General Assembly upon the recommendation of the Security Council.”

Since 1946, the Security Council has done just that, discussing and voting behind closed doors in straw polls for members to either ‘encourage’ or ‘discourage’ a candidate to continue. This process has come to be known as the ‘Wisnumurti Guidelines,’ named after Ambassador Nugroho Wisnumurti of Indonesia who held the rotating presidency of the Council in November 1996 when the guidelines were set.

These straw polls continue until there is a majority candidate without a single veto from a permanent member of the Security Council. That name is then officially transferred to the General Assembly, whose membership historically rubber stamps the candidate.

But in recent years, there has been a push for greater transparency to those straw polls, not just within the political circles but from civil society, including the ‘1 for 7 billion’ campaign, which includes the World Federation of UN Associations, among others.

In line with this growing momentum for change, in December of last year, Mr. Lykketoft co-signed a letter with United States Ambassador Samantha Power, who at that time held the presidency of the Security Council for the month, to each of the Permanent Representatives and Permanent Observers. It stated that in the spirit of “transparency and inclusivity” the selection process should be opened to national nominations and informal briefings with the candidates.

“It’s an expression of living in a different time and age,” Mr. Lykketoft told the UN News Centre. “There is this strong opinion on it from very many Member States that they want to know much better the candidates, and maybe even formulate an opinion of who is going to be Secretary-General before the deliberations will start in the Security Council.”

This is where the game could potentially change, as Mr. Lykketoft noted.

If a majority of the nations rally around one candidate, “it will be very difficult to think of the Security Council coming up with another, different name,” he said.

“But if there are many candidates and no clear picture, it could very well be the same end-game as it used to be.”

There are currently eight candidates officially nominated for the position of the Secretary-General. Their official nomination documents, CVs, photos and other supporting documents are publicly available online.

As with instructions on the selection process for a candidate, the UN Charter gives scant information on the qualifications for the post.

In his interview with the UN News Centre, Mr. Lykketoft described a person with “clear ideas and capacity” to reshape the Organization so that it reflects much better “the interconnectivity and the interdependence of all the basic challenges that the United Nations are going to face in sustainable development, in peace and security, in human rights.”

The ideal candidate would have the “contact with the global public opinion and authority to call to the major and minor powers, particularly in the Security Council, to act timely,” he noted, referring to stalled action in the Council on a number of threats to international peace and security.

“I hope that the world and the world power are ready to accept that the Secretary-General at the outset should be a strong and independent personality,” he added.

What he feels strongly that the international community is ready to accept is a female Secretary-General.

“We have to keep clear, I think, that we have to find the best person. But many of us don’t see any reason why the best person should not be a woman for the first time,” he said. “And that’s an argument in itself.”

In addition to gender, there is an additional consideration that could potentially give some an advantage. Eastern Europe is the only region thus far without a previous Secretary-General.

Of the current eight candidates, four are women, and three of those candidates are from Eastern Europe, one of whom is a current UN official. 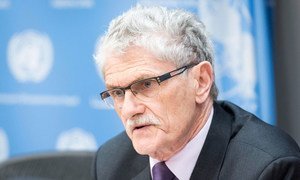 As the process to select the next United Nations Secretary-General gets under way, the President of the General Assembly announced today that he will hold a series of informal dialogues and meetings with all potential candidates from 12 to 14 April.