The objective of extremists “is for us to turn on each other [and] our unity is the ultimate rebuke for that bankrupt strategy,” Secretary-General Ban Ki-moon said today, underscoring that the action plan he presented to the United Nations General Assembly in January contains concrete recommendations and could be the basis of a global partnership to defeat violent extremism.

While it may be inevitable to draw on examples, such as Da’esh [also known as the Islamic State of Iraq and the Levant, or ISIL] or Boko Haram, “the phenomenon of violent extremism conducive to terrorism is not rooted or confined to any religion, region, nationality or ethnic group,”

the Secretary-General told the Geneva Conference on Preventing Violent Extremism – The Way Forward, co-hosted by the Government of Switzerland and the UN.

Violent extremists seek to divide communities and the goal is to let fear rule, he said. “Let this conference – and our unity today – be the ultimate rebuke to that bankrupt strategy.”

Violent extremists pose a direct threat to the UN Charter and the Universal Declaration of Human Rights. They undermine collective global efforts to maintain peace and security, foster sustainable development, promote the respect for human rights and deliver much needed humanitarian aid, said the UN chief.

Violent extremism is clearly a transnational threat that requires urgent international cooperation, Mr. Ban said, explaining that his Plan of Action to Prevent Violent Extremism puts forward a comprehensive and balanced approach for concerted action at the global, regional and national levels.

The Plan was first submitted to the General Assembly on 15 January. Then, on 12 February, the 193-nation body adopted a resolution that welcome Mr. Ban’s initiative, pledging to give further consideration to the Plan, including in the Global Counter-Terrorism Strategy review in June 2016, as well as in other relevant forums.

Mr. Ban expressed hope that today’s discussions will galvanize unity for a strong consensus outcome in the Assembly in June.

The Geneva Conference, which opened yesterday, aims to provide an opportunity for the international community to share experiences and good practices in addressing the drivers of violent extremism and to build support for the Plan of Action. The first day was dedicated to a meeting of senior experts on key issues related to the prevention of violent extremism.

Five points of Plan of Action to Prevent Violent Extremism

The action plan is based on five interrelated points, Mr. Ban said, namely prevention, national ownership, international cooperation, UN support and united action.Security and military responses sometimes have proven to be counter-productive, and there is a need to address the drivers of violent extremism, he noted.

“There is no single pathway, and no complex algorithm that can unlock the secrets of who turns to violent extremism,” he stated. “But we know that violent extremism flourishes when aspirations for inclusion are frustrated, marginalized groups linger on the sidelines of societies, political space shrinks, human rights are abused and when too many people – especially young people – lack prospects and meaning in their lives.”

The Plan emphasizes conflict prevention, conflict resolution and political solutions, and urges full implementation of the Sustainable Development Goals (SDGs), as that will address many of the socio-economic drivers of violent extremism.

The Plan offers a menu of recommendations for Member States to forge their own national action plans, which should use an “all-of-Government” approach and engage “all-of-society” to be effective. No country or region alone can address the threat of violent extremism, he said, stressing the need for a dynamic, coherent and multi-dimensional response from the entire international community.

He pledged to leverage the universal membership and the convening power of the UN to further strengthen international cooperation at the national, regional and global levels, noting that he plans to create a UN system-wide high-level action group to spearhead the implementation of the Plan at both the Headquarters and field levels.

“We will not be successful unless we can harness the idealism, creativity and energy of 1.8 billion young people around the world,” he said, calling for a global partnership to prevent violent extremism. “I have no doubt that we will succeed if we are united in action,” he concluded. 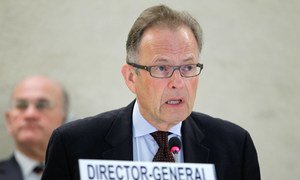 Violent extremism is an affront to the very purposes and principles of the United Nations, the Head of the world body’s Geneva headquarters said today, urging government delegations and experts gathered there to back the comprehensive approach needed to proactively address the drivers of the scourge, including through support of the Secretary-General’s action plan on the issue.