WFP/Hetze Tosta
Some of the food distributed to the drought-affected communities of Las Hastas and Los Achiotes in the town of Orocuina, Choluteca, Honduras.
7 April 2016

Speaking at the end of visits to El Salvador and Guatemala to see the compounded impact of El Niño, one of the strongest in the last half century, World Food Programme (WFP) Executive Director Ertharin Cousin said that the agency planned to scale up to help the most vulnerable in the four countries through August.

“At the same time, working closely with Governments, we are placing resilience at the heart of our longer response,” she said in Guatemala. “We must work to ensure vulnerable people are not repeatedly pushed deeper into hunger and can build longer-lasting assets that will survive potential disasters.”

“Overall WFP is committed to helping people build a world with Zero Hunger,” she added. “A key to this global goal being achieved in Central America and elsewhere is that communities are able to better adapt, ensuring they are more prepared for climatic shocks and can recover faster.”

People hit by drought benefit from programmes that deliver cash, cash-based vouchers and mobile transfers in El Salvador and Guatemala to obtain food – including more diversified and fresh produce – while simultaneously building local economies. In addition, WFP and its partners provide nutrition training as well as support for reforestation, irrigation and community gardens.

Ms. Cousin visited communities in the drought-prone Dry Corridor where she talked with local people about how to overcome the impact of the extended dry period.

According to assessments by WFP and governments, more than 2 million people in Guatemala, Honduras and El Salvador are food insecure. Most are subsistence farmers who harvest once a year and live in the Dry Corridor.

At Governments’ request, WFP provided food assistance in 2014 and 2015 to more than 1.2 million people in the three countries.

WFP is concerned that from March to April, small farmers in Central America may have to drain their cash and food reserves to obtain seeds and other inputs for the first crop cycle of 2016.

Next week, she will visit Haiti to meet vulnerable communities struggling with the impact of El Niño.

About 3.6 million people are food insecure in that country after three years of severe drought. WFP initially responded with food distributions for a two-month period to 120,000 people. It now plans to launch an emergency operation to assist 1 million people, primarily by cash transfers. More nutrition interventions are planned to prevent a rise in acute malnutrition.

Brazilian president donates $50,000 to UN to combat hunger and poverty 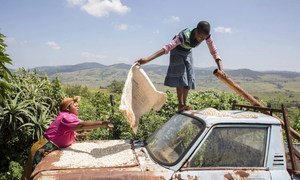 Thirty-four countries, including 27 in Africa, are currently in need of external assistance for food due to drought, flooding and civil conflicts, according to a new United Nations report released today.