Intensified fighting since January has resulted in a rapidly worsening security situation and large-scale displacement in Sudan’s Darfur region, the top United Nations peacekeeping official warned today, stressing that it is important that Security Council “impress on all parties to the conflict […] that a political solution remains the only viable option.”

UN Under-Secretary-General Hervé Ladsous said that since his last briefing to the Council on 25 January, the security situation in Darfur has been characterized by fighting between Government forces and fighters of the Sudan Liberation Army/Abdel Wahid (SLA/AW) in the Jebel Marra region, which straddles three Darfur states, namely North Darfur, Darfur Central and South Darfur.

Current situation on the ground

According to the Sudanese Government, it has taken control of the entire Jebel Marra region “with the exception of a few pockets of resistance.” The SLA/AW has denied those claims, maintaining that it had pushed the Government offensive back. “The escalation of fighting in Jebel Marra had led to large-scale displacement, especially from mid-January to late March, and humanitarian organizations estimated that at least 138,000 people from that region were newly displaced as of 31 March,” he explained.He went on to state that due to the Government’s restrictions on access, the exact number of civilian causalities could not be ascertained, adding that African Union-UN Mission IN Darfur (UNAMID) and relief agencies have been prevented from addressing the protection and humanitarian needs of the displaced. While emphasizing the difficulty of establishing an objective assessment of the fighting due to the access restrictions, he said it was clear that there had been continued clashes and aerial bombardments.

“The security situation in other parts of Darfur remained fragile with underlying tensions among and between local tribes over the access to, use and management of land, water and other resources, leading to persistent outbreaks of inter-communal conflicts despite measures taken by the local authorities to contain the clashes,” said Mr. Ladsous, adding that UNAMID continued to support Government efforts to mediate those conflicts and advocated consistently for addressing their root causes in a comprehensive manner, he said.

However, the proliferation of small arms and the presence of various militia groups had led to a rise in criminality and various types of banditry against civilians, he said. In spite of some improvements, the general weakness of the rule of law across Darfur had resulted in such violations going largely unpunished.

Despite the volatile security situation and considerable challenges, however, UNAMID remained steadfast in the implementation of its strategic priorities, including the protection of civilian and displaced populations, he stressed.

“The political process to settle the conflict remained polarized,” he noted. A referendum on Darfur’s administrative status — to determine whether it would become a single region or retain its current five subregional divisions — was scheduled to take place from 11 to 13 April. Despite several meetings held under the auspices of the African Union High-level Implementation Panel, progress in political efforts to reach a sustainable resolution of the conflict through inclusive dialogue remained elusive.Underlining the great importance of UNAMID and the Government pursuing a renewed partnership, he recalled that the UN, AU and the Government held a strategic tripartite panel meeting on 22 March. As elaborated in the meeting’s outcome, concrete actions by the Government were required in terms of lifting restrictions on the mission’s operations, among them delays in clearing customs, issuing visas and granting access to all areas, including conflict zones.

“It is important that the members of the Council impress on all parties to the conflict in Darfur that a political solution remains the only viable option,” said Mr. Ladsous, stressing that pursuit of political objectives through military means over the past decade has only contributed to the prolonged suffering of the civilian population.

As such he reiterated the Secretary-General’s call upon the Sudanese Government and the Sudan Liberation Army/Abdul Wahid to immediately cease hostilities in Jebel Marra, and commit to peaceful negotiations, without preconditions. 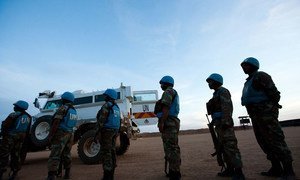 UN and African Union condemn ambush on peacekeepers in Darfur

The United Nations and the African Union have condemned Wednesday’s attack by an unknown armed group that killed one South African peacekeeper and injured another in Sudan’s Darfur region.