Briefing the General Assembly on recent disturbing allegations of sexual exploitation and abuse by United Nations peacekeepers, Secretary-General Ban Ki-moon’s Chef de Cabinet reaffirmed the Organization’s determination to tackle the issue head on and indicated that such violations, if verified, would trigger a decision by Mr. Ban to repatriate the units in question.

Edmond Mulet, briefing Member States on behalf of the Secretary-General, said that since last June, reports of sexual exploitation and abuse have continued to come to light in the Central African Republic (CAR) and in other countries.

On 24 March, the UN Children’s Fund (UNICEF) informed the Secretariat and the UN Multidimensional Integrated Stabilization Mission in the Central African Republic (MINUSCA) that it had received reports of sexual exploitation and abuse by UN and non-UN troops.

These acts are alleged to have been committed between 2013 and 2015 in Kemo prefecture. The information available so far indicates that there are more than 100 victims who have made allegations against both UN and non-UN forces.

“Tragically, the vast majority of the victims are children,” he said, adding, however, that “at this stage, these remain reports,” which must be verified and investigated swiftly and professionally.

“The Member States have been advised that if there is credible evidence to support the reports, their number would constitute widespread or systemic sexual exploitation and abuse,” he said, noting that this would trigger a decision by the Secretary-General, under UN Security Council resolution 2272 (2016), to repatriate the units in question.

In addition, the UN Organization Stabilization Mission in the Democratic Republic of the Congo (MONUSCO) reported 11 alleged acts of sexual exploitation and abuse, all of which involve paternity claims. The concerned troop contributing country has been formally notified of the reports and asked to take immediate steps to investigate.

As information becomes available, the Secretary-General will consider whether these circumstances should trigger any of the measures called for in resolution 2272, he noted.

“This is a global issue. It is not confined to any one region, mission or nation,” he said. “The United Nations must lead by example in confronting this criminal conduct, supporting victims and ensuring that blue helmets remain a beacon of hope for the people we serve.”

He went on to recall the various measures taken recently by the United Nations, including the Secretary General, to fight against this "scourge" that undermines the work of the Organization, and its beneficiaries, betrays the values and principles that the UN purports to advance, and tarnishes the credibility of UN peacekeeping operations and the United Nations as a whole.

“The United Nations is unwavering in its commitment to working in partnership with Member States to ensure that we take care of the victims, and ensure zero impunity. We are convinced that only determined collective action will bring results,” he concluded. 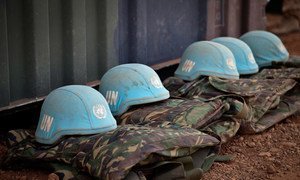 Findings of a United Nations Response Team tasked with investigating sexual abuse allegations committed by UN peacekeepers in the Democratic Republic of the Congo (DRC) indicate sex with minors along with paternity claims.