Every day lost in the implementation of Mali’s peace agreement is a day gained for extremist and terrorist groups that have bet heavily that the process will fail, the top United Nations peacekeeping official told the Security Council today, stressing that the Government and the armed groups who signed the deal must establish a timeline to resolve all pending issues.

UN Under-Secretary-General Hervé Ladsous reported significant progress in recent weeks towards implementing the Agreement on Peace and Reconciliation, including steps towards establishing interim administrative arrangements in the north, the creation of two new regions – Taoudenni and Menaka.

This on the heels of an 18 January meeting in Algiers of the Agreement Monitoring Committee, and a meeting convened by President Ibrahim Boubacar Keita on 27 February in Bamako, where the parties to the peace agreement had set an implementation timetable for March and April.

He noted other positive developments, including that on 31 March, the National Assembly adopted the Law amending the Code of local authorities which was followed by the adoption of a decree on the modalities of implementation of the interim authorities in local authorities.

“This is a decisive step that should be welcomed,” he said, adding: “it is now up to the parties to implement this law in the shortest possible time.”

Mr. Ladsous also drew the Council’s attention to the creation of national commissions on disarmament, demobilization and reintegration, as well as the construction of cantonment sites. In light of the security situation in the north, however, he warned that “progress on defence and security issues is too slow,” urging the Government and signatory armed groups to move forward on the Operational Coordination Mechanism that would be responsible for establishing mixed patrols and protecting cantonment sites.

“In effect, every day lost during the implementation of the peace agreement is a day won for extremist and terrorist groups who have been gambling on the failure of the Mali peace process,” he said, warning that delays in implementation would have an impact on intercommunal conflicts, particularly in the Gao and Mopti regions, with alarming consequences for civilians.

He paid tribute to Guinean peacekeepers and members of Mali’s defence and security forces killed in repeated confrontations with the Al Mourabitoun and Ansar Eddine movements, as well as other victims of terrorist attacks.

Turning to the security situation, Mr. Ladsous saluted the efforts of Malian security forces to counter the influence of terrorist groups, in cooperation with neighbouring States and Operation Barkhane. The UN Multidimensional Integrated Stabilization Mission in Mali (MINUSMA), for its part, was stepping up its own security measures, he said, emphasizing the latent threat posed by terrorist and organized crime groups in a time of change for UN peacekeeping in West Africa, as well as the need for reinforced cooperation with the African Union, among others, on intelligence and border security.

He announced a strategic review of MINUSMA by the Department of Peacekeeping Operations ahead of the Secretary-General’s next report, in late May, a month before the Mission’s mandate was due to expire. 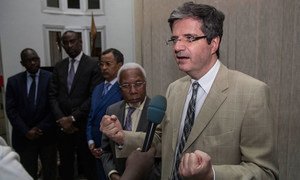 The United Nations Security Council is in Mali today, the first stop of its visit to the African continent, where it underlined that the 15-member body is united in supporting the country's peace and reconciliation efforts.