Addressing an international forum on peacebuilding and statebuilding, the United Nations deputy chief today highlighted the need for a greater investment in those activities and the importance of taking more preventive measures to reduce humanitarian needs.

“We live in a world of interdependence,” said Deputy Secretary-General Jan Eliasson at the fifth global meeting of the International Dialogue on Peacebuilding and statebuilding, held in Stockholm, Sweden, noting that achieving the new global development goals will, clearly and to a large degree, depend on how much progress is made in conflict-affected and fragile countries.

The International Dialogue is a political forum to bring together countries affected by conflict and fragility, development partners, and civil society. The theme of today's meeting was “Addressing Fragility and Building Peace in a Changing World.”

Mr. Eliasson outlined five key areas in which those actors can help change the direction of peacebuilding and statebuilding efforts.

First, he stressed the need to switch from reactive, short-term responses to prevention, peacebuilding and statebuilding. “Of course, we must address immediate humanitarian needs. But we also need to take more preventive measures to reduce humanitarian needs,” he said.

Second, a greater investment is needed in prevention and peacebuilding, he said. In 2016, the Secretary-General's Peacebuilding Fund targets a mere $100 million, which pales in comparison with his largest-ever annual humanitarian appeal of $20 billion and the UN peacekeeping budget of about $8.5 billion.

“The World Humanitarian Summit in May 2016 in Istanbul will be a critical occasion to address systemic funding problems,” he said.

Third, inclusive political dialogue is vital as a means to find solutions to conflicts. National ownership, capacities and accountability are key in this pursuit while consistent international political, technical and financial support is needed in true partnership.

Fourth, the focus on measurable outcomes must not lead to a diversion of resources from prevention and long-term peacebuilding and statebuilding, he said. “It is relatively easy to report to parliaments and the public on how many lives are saved by humanitarian emergency aid. But we need to get better at measuring, and making a stronger case, for the work of prevention and peacebuilding.”

And fifth, the UN's three pillars of peace and security, sustainable development and human rights form an integrated whole. That is the central premise of the 2030 Agenda for Sustainable Development, he said, stressing that complex problems cannot be sub-divided into often hermetically separate silos.

“The answers demanded by the 2030 Agenda are cooperation, integration and coherence – within the UN system as well as in the policies of Member States,” he said. 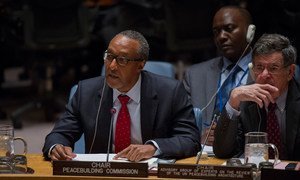 The head of the United Nations advisory body tasked with making recommendations on post-conflict recovery, reconstruction and development stressed today that building lasting peace requires predictable, sustained and adequate efforts and financing to help stop violence and address the root causes of conflict.