Chronic malnutrition in Rwanda have fallen significantly in the last three years, but still remain stubbornly high, especially in rural areas, finds a new study conducted over three years by the Rwandan Ministry of Agriculture with support from the World Food Programme (WFP).

The Comprehensive Food Security and Vulnerability Analysis report in Rwanda found that levels of stunting among children aged under five dropped to 36.7 per cent in 2015, down from 43 per cent at the time of the last analysis in 2012. Stunting, where a child is short for their age, is an indicator of chronic malnutrition and permanently affects brain development and health.

“It is clear Rwanda is making impressive progress in its fight against food insecurity and undernutrition, but we must keep working together in order to win that battle for good,” said Jean-Pierre de Margerie, WFP’s Country Director for Rwanda. “At WFP, we are committed to continuing our work to help Rwanda keep improving its food and nutrition security,” he added.

“The aim is to improve national capacities to develop, design and manage nationally-owned hunger solutions, which is why we are supporting the government’s effective strategies to make Rwanda a food-and-nutrition-secure country,” he explained.

According to WFP, the new CFSVA indicates a geographic nutritional divide, with rural areas being the most affected by child malnutrition at a rate of 40 per cent, compared to 27 per cent in urban areas. In addition, the districts with the largest share of food insecure households are predominantly in the Western Province, and include Rutsiro, Nyamagabe, Nyabihu, Nyaruguru, Rusizi, Karongi and Nyamasheke.

Poverty, illiteracy and insufficient land for farming are among the factors linked to food insecurity, and are the most likely root causes of stunting, especially among rural people. According to the report, children of mothers with low education are more often stunted.

The report recommends enhancing efforts and initiatives to reach the most vulnerable people in the most affected rural areas, particularly by expanding social safety nets to include the poorest, most food-and-nutrition-insecure households.

WFP said the CFSVA report also recommends scaling up seasonal interventions to assist households experiencing food insecurity at certain times of year, for example in the “lean season” before a harvest is due. The report advises promoting alternative livelihood development programmes in order to provide more stable sources of income, and to develop and diversify livelihood opportunities for the most affected rural population.

The Comprehensive Food Security and Vulnerability Analysis is a joint initiative between the Rwandan National Institute of Statistics (NISR), the Ministry of Agriculture and Animal Resources (MINAGRI) and World Food Programme (WFP). 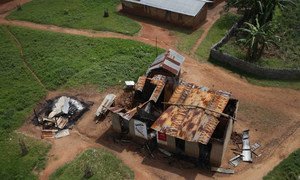 The Security Council today expressed regret over the limited progress in implementing national and regional commitments under the peace, security and cooperation framework for Africa's Great Lakes region, stressing that signatory States must carry out those obligations in order to achieve lasting peace.