OHCHR
Cécile Pouilly, spokesperson for the Office of the High Commissioner for Human Rights.
5 April 2016

The United Nations human rights office today expressed concern over the increased number of mob attacks in Malawi since the beginning of the year, in 2016 and called for Government agencies to support police and for the strengthening of the rule of law in the country to combat such violence.

“Over the past two months, at least nine separate incidents were reported across the country, in which 16 people were killed,” Cécile Pouilly, spokesperson for the Office of the UN High Commissioner for Human Rights (OHCHR) told the regular bi-weekly press briefing in Geneva.

According to Ms. Pouilly, 28 March , a mob stormed a police station and took a man accused of murder before the murder out of his cell and killed him in Dedza, a town about 85 km from the capital, Lilongwe. In another incident, on 1 March, seven people suspected of trafficking human bones were attacked and burned alive by an angry mob in the district of Nsanje in southern Malawi, she added.

She went on to report that an incident that took place on 25 January in the district of Neno, where four members of the same family were beaten to death by a mob, after being accused of using witchcraft to kill a 17-year-old woman by lightning. In another incident, on 3 February, the inhabitants of a township in Blantyre, Malawi's second city, set fire to a court, apparently to prevent the release on bail of three men suspected of murder.

“We welcome the statement made 30 March by President Arthur Mutharika strongly condemning these crimes and call on all citizens, [non-governmental organizations] and government agencies to support the Malawi Police in its fight against mob killings in accordance with the rule of law,” Ms. Pouilly said.

She also called on Malawian authorities to act quickly to identify and prosecute those involved in the killings and to offer compensation to the victims.

“We also urge the authorities to address the root causes of these attacks and to launch an awareness campaign to encourage people to report crimes to the police, rather than to take justice into their own hands,” called Ms. Pouilly. 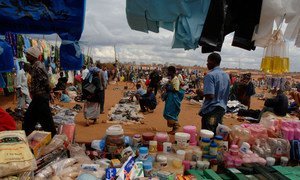 The United Nations refugee agency today welcomed a decision by the Malawian Government to reopen a former refugee camp to help cope with the rising numbers of people fleeing internal fighting in Mozambique.