The United Nations today welcomed the arrival in the Libyan capital of Prime Minister Fayez Serraj and other members of the Presidency Council of the Government of National Accord.

“This was an important step towards bringing stability to the country and bringing the political process back on track to implement the Libyan Political Agreement,” the Security Council said in a press statement issued by Ambassador Liu Jieyi, the Council president for the month of April.

The Libyan Political Agreement, which was signed in Skhirat, Morocco, on 17 December 2015, following a UN-brokered process to form a national unity. The Council had welcomed the Agreement in its resolution 2259 (2015).

In today's statement, the Security Council encouraged the Presidency Council to urgently start its work so as “to broaden the basis of its support and to tackle Libya's political, security, humanitarian, economic and institutional challenges and to confront the rising threat of terrorism.” In particular, this includes the threat from groups proclaiming allegiance to Islamic State in Iraq and the Levant (ISIL) and groups affiliated with Al Qaeda.

The Council also reiterated its call on all parties in Libya to support the efforts underway and again expressed concern about activities which could be damaging to the “integrity and unity of Libyan State financial institutions and the National Oil Corporation.”

In addition, the Council renewed their call, from resolution 2259 (2015), “to cease support to and official contact with parallel institutions that claim to be the legitimate authority but are outside of the Libyan Political Agreement as specified by it.”

Since arriving on Thursday, the Presidency Council has met with local political leaders, as well as businesses, including with the Governor of the Central Bank and Tripoli municipalities. 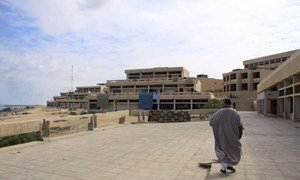