UN Photo/Loey Felipe
Special Representative of the Secretary-General for Haiti and head of the UN Stabilization Mission in the country (MINUSTAH), Sandra Honoré, briefs the UN Security Council.
16 March 2016
Peace and Security

Sandra Honoré is the Special Representative of the Secretary-General for Haiti and head of the United Nations Stabilization Mission in the country (MINUSTAH). A post she has held since 15 July 2013.

During a visit in March 2016 to the UN headquarters to brief the Security Council, Ms. Honoré sat down with the UN News Centre to discuss the second round of the presidential elections scheduled to be held on 24 April 2016.

The interview below has been translated from French, and has been edited for clarity. The interview was held before the official announcement of a delay to the 24 April 2016 date.

These elections will ensure that the country can survive the current impasse.

UN News Centre: Can you give us an overview of the major stages of the election and the current political situation process in Haiti?

The second round of presidential elections should have taken place on 27 December 2015. It was adjourned until January 2016. Unfortunately, the elections for the president and for some of the parliamentary seats, did not take place in January.

The positive aspect is that following the two rounds in August and October 2015, 14 seats out of a total of 20 have been filled in the Senate, and 92 seats out of 119 in total were provided to the Chamber of Deputies. I say positive because the Haitian Parliament was able to work again on 1 January 2016, after a year of not functioning. 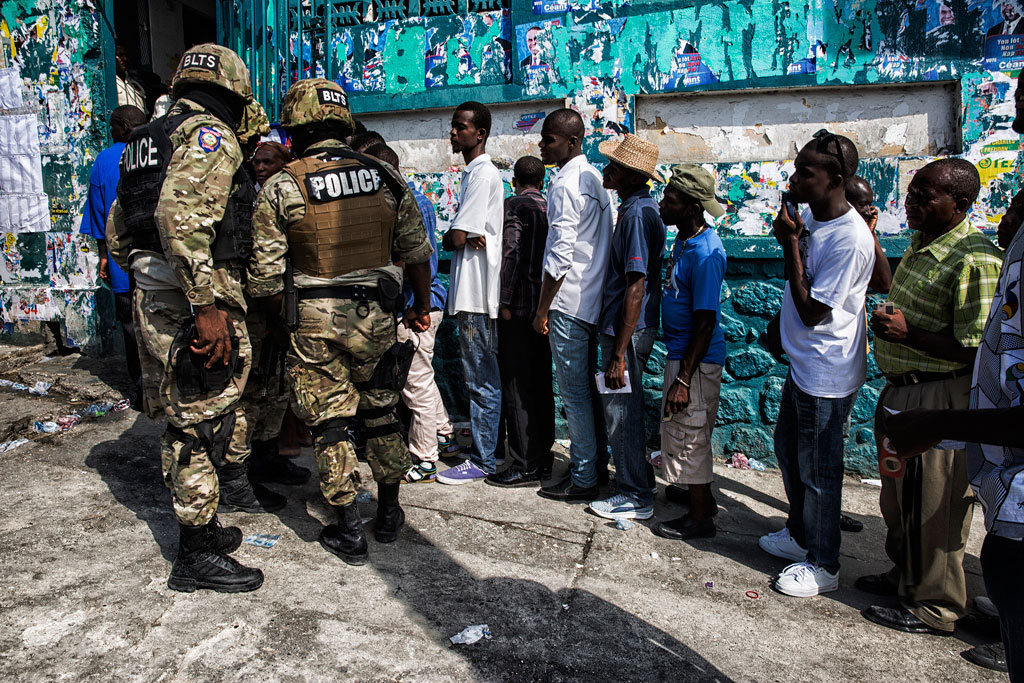 Haitians vote in the second round of the legislative and senatorial elections and the first round of the presidential election in Haiti’s capital, Port-au-Prince, on 25 October 2015. UN Photo/MINUSTAH/Logan Abassi

UN News Centre: Can you describe the circumstances of the Jocelerme Privert’s election as interim president of the country, a week after the departure of former President Michel Martelly on 7 February 2016?

Sandra Honoré: Due to the fact that the mandate of President Martelly would have ended without an elected successor, a political agreement for institutional continuity was concluded between President Martelly, the President of the Senate of the time Jocelerme Privert [currently the President interim], and the President of the Chamber of deputies. This agreement was inspired by the Constitution. Under the terms of this agreement, the Haitian Parliament-elected interim President, in this case Mr. Privert, has a fixed term of 120 days. The agreement sets out a number of tasks for the interim President and the Parliament. It provides, inter alia, the creation of a Consensus Government and the continuation of the electoral process initiated in 2015, including the relocation of the Provisional Electoral Council and the organization of presidential elections, the second round of parliamentary elections and local elections.

UN News Centre: The elections are scheduled for 24 April ...

Sandra Honoré: According to the Agreement, yes. The expected date for the elections is April 24.

UN News Centre: What are your expectations for these elections?

UN News Centre: As the Special Representative of the Secretary-General for Haiti, you are called upon to meet with the key actors on the ground. What are you hearing from them?

Sandra Honoré: The Haitians with whom I have the opportunity to exchange ideas and opinions share everyone’s desire to see the country move forward, to see the economy grow at all levels and, above all, to live in stability. Haitians are eager to have regular and normal operations, the desire to create opportunities for their children and see the socio-economic development of the country move forward. 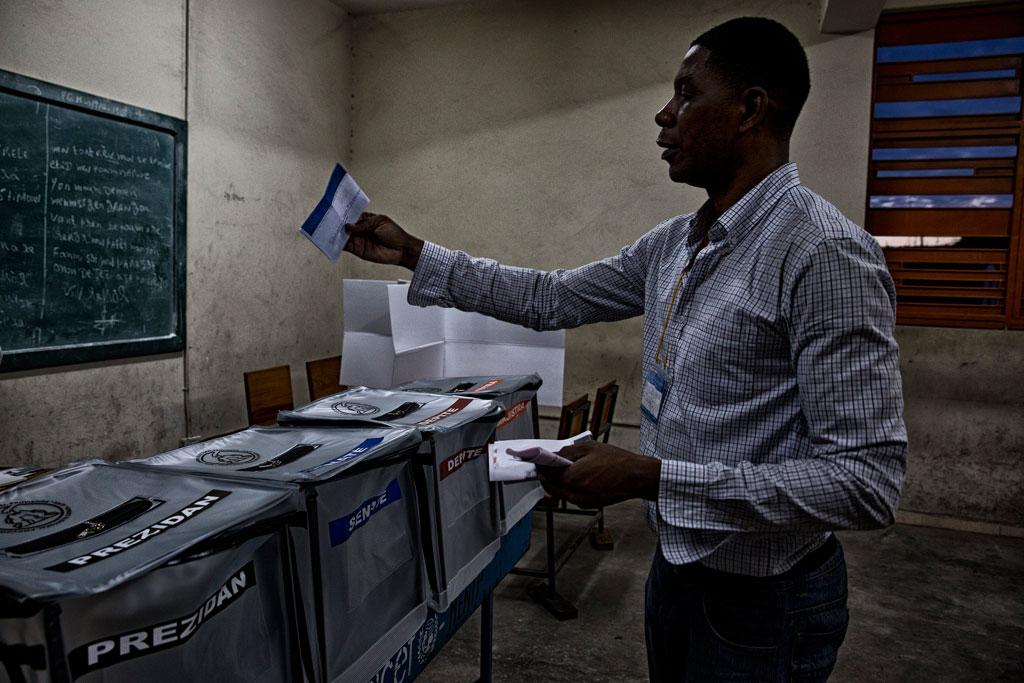 Voting in Port-au-Prince, Haiti, during the election on 25 October 2015. Photo: MINUSTAH/Igor Rugwiza

UN News Centre: You came to report on the situation in the country to the UN Security Council. What was your main message to the 15 members?

Sandra Honoré: My main message to the 15 members, who mandate the UN Mission in the country was to explain the current situation, namely the work of MINUSTAH.

MINUSTAH has reached the final year of its peace operations before transitioning to a newly configured UN presence in Haiti. Despite the current political impasse, the electoral process must continue.

I also presented the Council with information on the preparations for MINUSTAH’s transition of MINUSTAH, which e are making and were asked to perform under the mandate of the Council to give the Haitian people the opportunity to take full control of their own destiny.

UN News Centre: What were the reactions of the Council to your briefing?

Our desire is to help ensure that the authorities, and the Haitian society in general, fully support all the functions currently performed by MINUSTAH.

Sandra Honoré: Members of the Council expressed their concern. For the past few years, the Council has been following closely the electoral process in Haiti, in particular the issue of democratic consolidation process in the country. The 15 members were concerned by the postponement of the electoral process initiated in 2015 and expressed a desire that the interim presidency of the country, the provisional government and all stakeholders, including political actors and civil society, do what is necessary to resolve important issues and come to restore institutional continuity.

UN News Centre: How does the current stalemate impact the Mission’s consolidation work?

Sandra Honoré: The Mission’s mandate from the Security Council is the professionalization and modernization of the National Police Haiti, which also aims to strengthen the rule of law, the promotion and protection of human rights. The Good Offices of the Special Representative of the Secretary-General is also part of the work.

This mandate and the tasks related to this mandate will continue. Our desire is to help ensure that the authorities and the Haitian society in general, fully support all the functions currently performed by MINUSTAH. And we will continue in this way until the Security Council gives us new directions and a new position regarding support of this mission to the country.

UN News Centre: How has the Mission contributed to the political stalemate?

Sandra Honoré: The Mission supports the Provisional Electoral Council and the competent authorities of the Government on capacity building and in the formulation of advice and guidance for the organization of elections. The United Nations system has contributed, contributes and will contribute to the electoral process, particularly through the United Nations Development Programme (UNDP), which develops a set of actions and activities in the country. UNDP is responsible for the management of the Trust Fund for electoral operations. And UNOPS [United Nations Office for Project Support Services] provided assistance in terms of logistics elections. The 5 February Agreement was an agreement between the Haitian political actors, including the President of the Republic, then Senate President and the Speaker of the Chamber of Deputies. 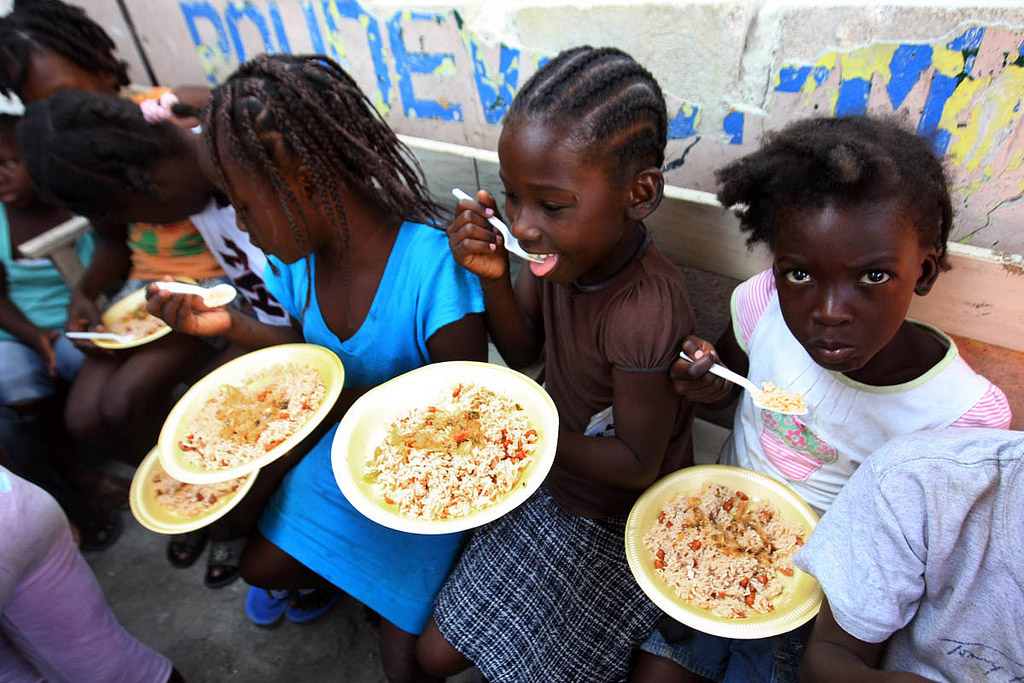 The Good Offices of the Representative of the Secretary-General is a political tool that allows us to be in touch with the whole society, with political parties, non-governmental organizations and organizations responsible for the promotion of human rights. We are constantly in touch with all these players. We have not taken part in the conclusion of t5 February Agreement, but we supported, encouraged and urged stakeholders to reach an agreement capable of restoring institutional continuity, because the country was under the threat of constitutional vacuum. It was important that national actors could find a national solution of consensus, which was the case.

UN News Centre: What recommendations would you make to the attention of the current interim government and the future government?

Sandra Honoré: The interim authorities have a clearly defined task in the 5 February Agreement. These tasks relate primarily to the organization of elections, the continuation of the electoral process initiated in 2015. It is important that the country can conclude this process with an elected president and a Government, in accordance with the provisions of the Haitian Constitution.

My message to the authorities who will implement this Agreement is to find a way to achieve consensus positions and demonstrate their commitment to acting in the interests of the Haitian people and in the best interests of Haiti as a nation.

Deeply concerned by the continued suspension of electoral rounds in Haiti, the United Nations Security Council today called for the completion of the polling cycle without further delay to allow the Haitian people the opportunity to vote for their elected representatives in a free, fair, inclusive and transparent contest.