The former head of the United Nations peacekeeping force in Cyprus, Lisa M. Buttenheim, has been named deputy of the Department of Field Support, which provides support to UN peacekeeping and political field missions.

In a statement, the Secretary-General noted Ms. Buttenheim's “extensive experience with the United Nations in political affairs and peacekeeping, both at Headquarters and in field operations.”

She had most recently served as the Secretary-General's Special Representative in Cyprus, the head of UNFICYP and Deputy to the Special Adviser on Cyprus, Espen Barth Eide.

Those roles will be taken up this summer by Elizabeth Spehar.

With nearly a decade of experience in the UN Department of Political Affairs, Ms. Spehar currently heads the Department's Policy and Mediation Division. She previously served as Director for the Americas and Europe Division and Director of the Europe Division, “engaging extensively on key political issues facing the region,” according to a separate statement by Mr. Ban.

A native of Canada, Ms. Spehar was a senior official with the Organization of American States prior to joining the United Nations.

♦ Receive daily updates directly in your inbox - Subscribe here to a topic.
♦ Download the UN News app for your iOS or Android devices.
officials 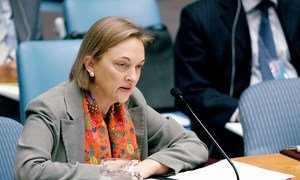 “It’s so valuable to have women on the ground, whether as a civilian or in a uniformed position” – Lisa Buttenheim

On 31 October 2000, the United Nations Security Council adopted the historic resolution 1325, drawing attention to the differential impact of armed conflict on women, their exclusion from conflict prevention and resolution, peacekeeping and peacebuilding, and the inextricable links between gender equality and international peace and security.

Ahead of the anniversary, the UN News Centre spoke with Lisa Buttenheim, the Secretary-General’s Special Representative and Head of the UN Peacekeeping Force in Cyprus (UNFICYP). The United States national, who has extensive experience with the UN in the political and peacekeeping areas, reflects on the impact of resolution 1325 both in the wider world and within the Organization itself.