The United Nations envoy for Libya today welcomed the arrival in Tripoli of the Presidency Council, which marks an important step in Libya's democratic transition and path to peace, security and prosperity.

"I commend the courage, determination and leadership of the Presidency Council under its president Fayez Serraj in moving forward with the implementation of the Libyan political agreement and the aspiration of the overwhelming majority of the Libyan people,” Martin Kobler, Special Representative and Head of the UN Support Mission in Libya (UNSMIL) said in a statement.

“The international community stands firmly behind them and is ready to provide the required support and assistance,” he added, calling on the Libyan people to extend to the Presidency Council and the Government of National Accord their full support and cooperation.

Echoing the 10 March statement of the Libyan political dialogue, the Special Representative urged all public bodies, including official financial institutions, to facilitate an immediate, orderly and peaceful handover of power.

The Special Representative further stressed that all security actors have a responsibility to ensure the safety and security of the Presidency Council and of the Government of National Accord, and should refrain from any action that can undermine this crucial phase of Libya's transition.

UNSMIL was established in 2011 by the UN Security Council at the request of the Libyan authorities to support the country's new transitional authorities in their post-conflict efforts.

Across the country, it is estimated that 2.4 million individuals are in need of some form of humanitarian assistance and more than 40 per cent of the health facilities in Libya are not functioning. 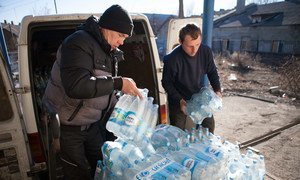 Ukraine: UN calls on all parties to ensure access to safe drinking water in eastern region

Concerned about the continuing impact of the armed conflict in eastern Ukraine on civilians, the United Nations today called on all parties to ensure access to safe water in Donetsk, after security concerns forced the evacuation of staff from a water treatment facility that serves thousands of people in the area.