PODCAST: From anger to laughter, what happens when three top comedians walk into the UN? 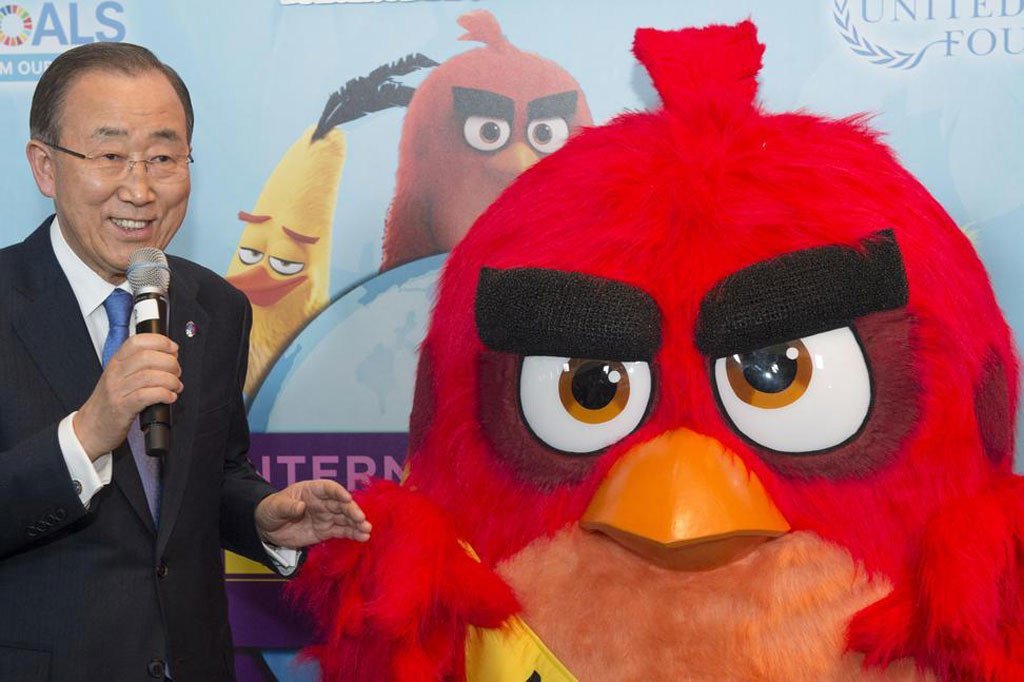 UN Photo/Eskinder Debebe
Secretary-General Ban Ki-moon with Red from the ‘Angry Birds’ who was appointed Honorary Ambassador for International Day of Happiness.
29 March 2016
Climate and Environment

What happens when three top comedians leave their Hollywood comfort-zone and walk into the United Nations to talk climate change and sustainability?

What happens when three top comedians leave their Hollywood comfort-zone and walk into the United Nations to talk climate change and sustainability?

You'll hear the comical results on the latest episode of UN Radio's podcast series, The Lid Is On.

Self-described “chuckleheads”, Jason Sudeikis, Josh Gad, and Maya Rudolph, are well-known to moviegoers and television audiences in the United States. But what's not so well known is their commitment to join in the UN campaign for mitigating the harmful effects of climate change, and promoting the 2030 Agenda for Sustainable Development.

The trio were at UN Headquarters in the middle of March to help young people step up their actions to address climate change, in partnership with Angry Birds. With perfect timing, it was also an event in honour of the International Day of Happiness.

All three star in The Angry Birds Movie which will be released in May, and they were on hand at the UN to help 'Red,' the main character from the movie – and the iconic Angry Birds mobile game – become an Honorary Ambassador for Green, in a special ceremony with UN Secretary-General Ban Ki-moon.

In between their official events, the comedy stars took time to sit down in the UN Radio studio with producer Dianne Penn, to talk about the power of laughter to change minds, and make light of a very serious subject: preserving the planet for future generations.

"This interview was definitely a deviation from the ones we normally do,” said Ms. Penn. “Getting the chance to talk about climate issues but with three of the funniest people ever was certainly unusual but enjoyable!"

The United Nations today appointed Red, the leader of the “Angry Birds” mobile game characters, as an envoy to inspire climate action toward a sustainable and happier future for all.